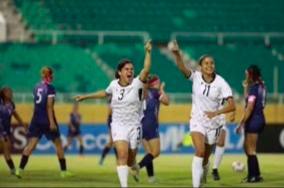 Evelyn Chudowsky ’24 celebrates a goal from her team in a game against Bermuda on April 28.

When Evelyn Chudowsky ’24 found out she made the Dominican Republic National soccer team, she couldn’t have anticipated just how much she would gain from her experience.

The tryouts took place during a four-day period back in November of 2021 with other girls from across the US and the Dominican Republic who were under the age of 17. A chance to be on the team was momentous to Chudowsky both personally and in the realm of soccer.

“When I first found out I had the opportunity to try out I just felt immediately super honored to even be considered for it and also I just thought it was a huge honor to represent a country as well,” Chudowsky said. “My mom is from the Dominican Republic so it was a really big deal just representing my family.”

Chudowsky has been playing soccer since she was young, driven by her family’s passion for sports. Her dad especially influenced her to play soccer as he once had himself.

“I tried it when I was younger and loved it and I kept going with it,” Chudowsky said.

She continued to play soccer in Westport through her adolescent years and has most recently been a starting forward for Staples girls’ soccer this past fall when they had an incredibly successful season.

“Playing soccer here in Westport and also for Staples honesty is such an honor,” Chudowsky said. “I loved playing for Staples. It’s one of the greatest environments I have ever been a part of.”

Chudowsky will continue her passion for soccer as a member of the Dominican Republic national team. Besides the initial excitement, Chudowsky was eager to reunite with the people she had met back during tryouts.

“I was obviously really excited but it was really special to me going down there, seeing everybody I met in November again and just getting to know everybody especially because some of the girls don’t live near me,” Chudowsky said.

“Soccer for me is pretty much the same everywhere,” she said. “It’s always kind of been like just something I know I can rely on that’s consistent and I think the biggest difference between playing internationally as opposed to high school I think is just that mental aspect.”

The elevated pressure of representing a country was something that challenged Chudowsky mentally.

“I definitely learned how to keep my cool when I feel pressure or like just nerves or stress before the game, just kind of reminding myself, talking myself up to it and just going and playing it like it’s just another soccer game,” Chudowsky said. “[…] But I think the second you step onto the field it’s like all of those nerves kind of melt away.”

In addition to building skills to play well under pressure, Chudowsky reflects on being more independent.

“It was definitely an experience to be away from my family for that long but they did end up coming about a week or so in so I was able to talk to them and [the experience] overall just taught me how to be independent and look after myself,” Chudowsky said.

Chudowsky’s team was remarkably successful and will take away experiences they will remember fondly. In the quarter-finals, the Dominican Republic team pulled out a win beating their rivals, Haiti.

“They are rivals of ours cause we are right next to each other and I think the bus ride home was probably one of the coolest dynamics ever. Everyone was super excited playing music and dancing and it was honestly just really great.”

While Chudowsky was challenged in various ways and is now experiencing the repercussions from being away from school for three weeks, she is truly grateful for such an amazing experience of growth and meeting/bonding with new people.

“I have a lot of assignments, a lot of catching up to do,” Chudowsky said with a smile, “but it’s definitely an experience that I’ll never forget and it was super incredible to be a part of something like that.”