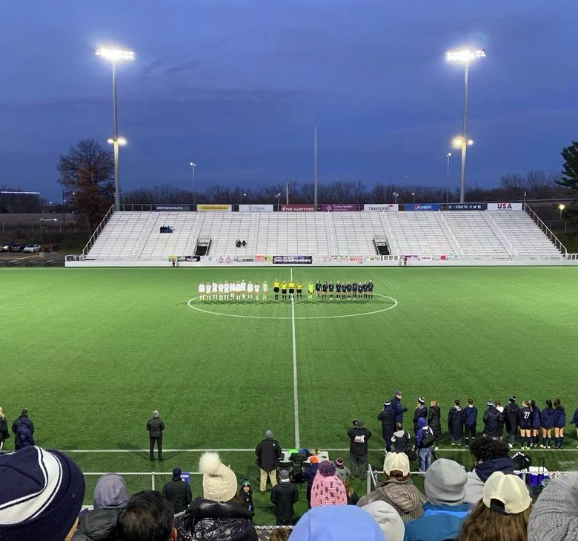 The girls’ soccer team lined up with the opposing team before their semifinal game. This lineup is a tradition before every championship game where they announce the starting lineup.

The Staples girls’ soccer team is moving up in the state tournament. They won their semi-final game against Fairfield Warde 1-0 on Tuesday Nov. 18.

Gaby Gonzalez ’22 scored Staples’ one and only goal in the first 15 minutes of the first half. The Wreckers didn’t have many chances to score throughout the remainder of the game, so Gonzalez’s corner header was key to their success.

The second half of the game was a pure defensive half. The ball went back and forth between the two teams several times, but with the Wreckers’ unstoppable defense, the Mustangs didn’t get much of a chance to score.

“The game came down to the last seconds,” Gonzalez said. “Getting early goals are very influential but also very stressful because it is difficult to hold that lead for the rest of the game. I think it just came down to who wanted it more. We were on our toes the whole game and were determined to hold it until the end.”

In the regular season, Staples had lost to Warde 3-0, but going into the game the Wreckers did not let this past defeat affect them.

“The team’s mindset was more on proving to ourselves how far we have come since the start of the season and showing to everyone else how bad we want this state title,”  Lapatine said. “It didn’t matter that we lost in the regular season. It was a whole new game.”

Another key player in this game was goalie Cami Colek ’23. Although the defense rarely let the opposing team through their wall, Colek was always ready whenever they did get close. With the team playing with a small lead the whole game, Colek was always on her toes.

“For most of the game I didn’t have a lot of action because defense and the midfield are so good at getting the ball when the other team comes close to our goal,” Colek said. “The opportunities they had were mostly off of set-pieces and with 16 seconds left they had a free kick but I was able to catch it and keep our lead.”

The girls’ soccer team went on to face Wilton High School in the state championship on Saturday Nov. 20. The game ended in a 0-0 tie, resulting in co-state champions.