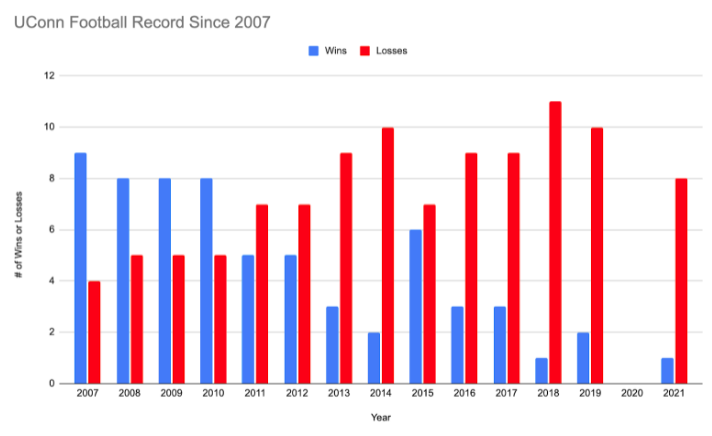 Since 2011, the University of Connecticut Football team has not had a single winning season. As Connecticut’s national representative for sports, UConn must improve their record and financial practices for the sake of state pride.

Since Connecticut does not have a notable professional sports team, our main athletic representative on the national stage is the University of Connecticut. Over 100 students from Staples are accepted into UConn every year, meaning that as UConn represents Connecticut, it, too, represents Staples. UConn has done this job poorly, as their sports programs, with the exception of basketball, are unremarkable. UConn’s football team is the most egregious of the teams, as a mix of poor performance and high-profile economic disasters have led it to become the laughing stock of college football.

The Fiesta Bowl on Jan. 1, 2011 was a painful day for the UConn Football team, as they lost to the University of Oklahoma Sooners 20-48. What was unknown to UConn; however, was that this would be the best they would get for the next 10 years. After the 2010-11 season, the UConn football team devolved into incompetence of historically large proportions.

After that fateful day in 2011, the UConn football team’s record has plummeted, not having a single winning season ever since. Their performance has been especially bad during the last three seasons, winning a collective four games since the beginning of the 2018 season. On Sept. 4 of this year, UConn lost  to the College of the Holy Cross, a team who hadn’t beaten a single FBS team for the last 19 years. This loss resulted in mass media backlash.

“[This] was rock bottom for the Huskies,” Mike Anthony said in a CT Insider article. “This is the lowest of lows for a… totally lost program.”

What worsens the sting is the sheer ineptitude of the contract of former football coach Randy Edsall. Edsall’s contract is laden with some of the strangest bonuses in athletic history. The contract gives thousands of dollars for seemingly menial things. This includes having more sacks than the opponent, having better third-down efficiency than the opponent or leading at halftime; which all net him $2,000 each. This has allowed Edsall to earn about $310,000 in bonuses, according to USA Today, added to his massive salary which topped $1.25 million in his final season. Edsall was given all of this money while going 6–30 throughout his last three seasons.

The UConn Football team’s financial incompetence, in part, led to the cut of four Division I sports. During the height of the COVID-19 pandemic, UConn chose to cut men’s cross country, men’s swimming and diving, men’s tennis and women’s rowing teams in order to save money. Like other universities, UConn faced the economic perils that came with the virus, but the athletic department had already been losing millions per year, running a bill of over $40 million. This debt was racked up in part due to the overspending of football. Even besides Edsall’s absurd contract, the Huskies lost about $13.3 million in 2019, according to the Hartford Courant, and only made $456,000 the year prior, according to Forbes.

UConn football has consistently embarrassed Connecticut through a mix of poor performance and horrendous economic decisions. If the University of Connecticut continues to display their poor abilities to run a team, then many will associate it with the state of Connecticut. UConn must fix their football team, not just for the benefit of the school, but for the pride of the state.