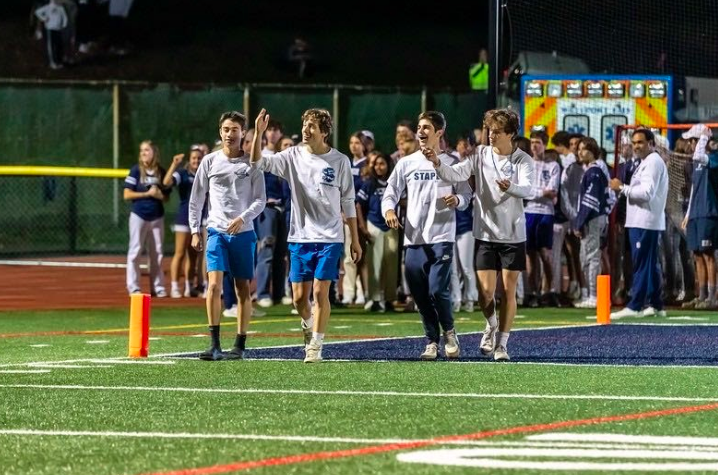 After defeating Fairfield Warde and Ridgefield in their final meet, the Staples boy’s cross country team finished with their second 15-0 undefeated season in just three years. This repeated dominance has been led by seniors, as they set the stage for the underclassmen, passing the baton off to the next class.

“The senior class has really put in the work this year in practice,” Kyle Harrington ’22 said. “We wanted to show the grades below us that the expectation of this program is you have to put in work.”

The underclassmen have appreciated the support from the seniors and value their work ethic.

“Though running is mostly a solo sport, the amount of encouragement this year’s seniors gave us makes us strive to become better,” Ben Lorenz ’24 said. “They are role models to us and help push the team to everyone’s full potential.”

Strong individual performances have been a key this year as well. The senior class has been especially strong this year with some of their top runners being twins Kyle and Alex Harrington ’22 and University of Chicago commit Zach Taubman ’22. After undergoing a season last year that consisted of multiple Covid cancellations, they were excited to compete during their last regular season. Unfortunately Rory Tarsy’s ’22 excitement to get back out there was dashed with an injury.

“I was knocked down after the first race with mono and the rest of the season wasn’t looking too strong for me,” Tarsy said. “But we were lucky that we have a really deep team who stepped up for this undefeated season.”

The Wreckers team adopted the next man up mentality and were able to continue to be successful. Fortunately for Tarsy, he will be able to compete in states and he’s hoping to qualify for New England’s. That is a big mindset for the rest of the team as well. They are now looking past the regular season for the  more to come.

“We hope to see continued success as we approach the championship races,” Zach Taubman ’22 said.