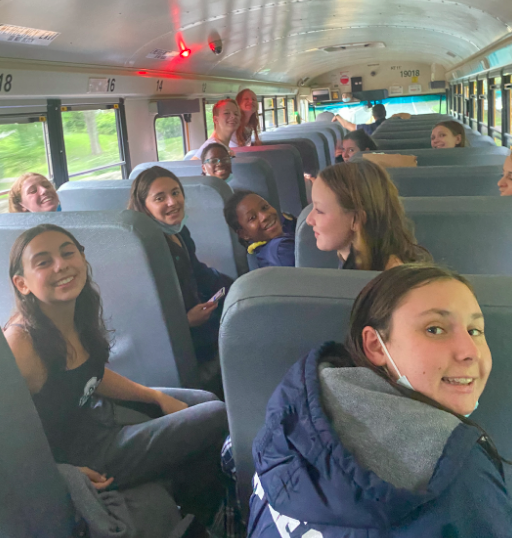 Many student-athletes have athletic early dismissals to get to their game/meet in time, causing them to miss hours of school. Pictured above, the Staples girls’ swim & dive team is on their way to an away meet, where they were dismissed from school around 1 p.m.

It’s 2:15 p.m., the time that used to represent the end of the school day, but now signals another half hour of class. Yet, throughout the school, numerous desks are empty and student-athletes are long gone.

In the 2021-22 school year, the Westport district pushed all school start times back by 30 minutes. Staples’ times have been adjusted from a 7:30 a.m. -2:15 p.m. school day to an 8:00 a.m. -2:45 p.m. school day. Although the delayed start time has its perks, the later dismissal has caused distress for many athletes due to the loss of class time.

When students participating in sports have a game or a meet, they are typically dismissed from school early to get to the given location on time. The difference between now and past years, however, is that students used to only miss around 15 minutes of their last period class, yet now are missing over an hour.

“It’s personally making it a lot harder to go to bed early, which isn’t great for my training,” Zach Taubman ’22, member of the Staples boys’ cross country team, said. “I have a lot of work to catch up on every night.”

Many student-athletes have limited time to begin with due to busy after-school schedules, and this increase in work after missing class is difficult to manage. Between balancing their sport, other extracurriculars and their physical and mental well-being, class absences are yet another addition to their list of challenges.

“I don’t even get home from games until it’s dark out, and then have to start all of my assigned homework,” Romy Nusbaum ’22, member of the Staples girls’ field hockey team, said. “Now I have to somehow add half a day of schoolwork on top of everything I have, which is just unreasonable.”

Besides the heavy workload, many students are having trouble learning the content on their own. They feel like they are falling behind and suffering in their classes as a result.

“It’s really hard to teach myself the lessons I missed because I can’t ask the teacher my questions,” Tamar Rotem ’23, member of the Staples girls’ swim & dive team, said. “Because of this, I end up becoming even more behind with the work.”

In addition, when these students do have questions about the content they have missed, it is difficult to meet with teachers during after-school hours due to their practice schedules. As a result, these students are forced to maneuver their schedules to fit in student-teacher conferences.

“My practice starts every day at three o’clock and if I’m late my team leaves without me and I have to run alone,” Molly Liles ’22, member of the Staples girls’ cross country team, said. “I have barely enough time to get there from last period, let alone meet with a teacher.”

Many students are now urging the administration to consider reinstating the previous start time so athletes do not have to miss as much class time.

“The thirty extra minutes in the morning is nice,” Nusbaum said, “but it isn’t worth the stress of missing so much school for my games.”