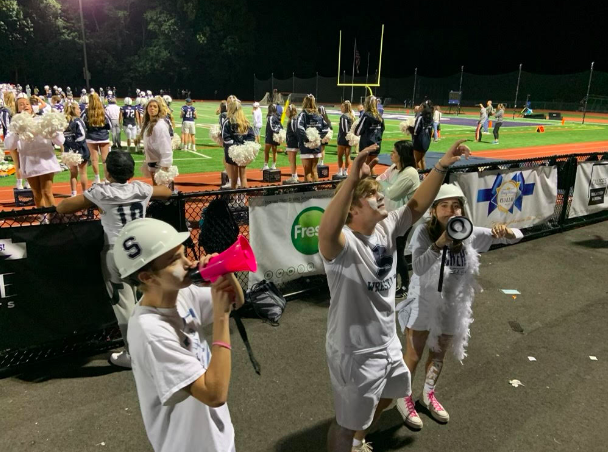 Superfan Captains lead the school spirit at all school sporting events. Here they rally the fan section at the last Staples football game on Sept. 17 vs St. Joseph. The Wreckers lost 35-14.

Last year’s sports season was full of missed opportunities and empty crowds. This year, however, Staples students are making up for it by spending weekday afternoons and Friday nights going with groups of friends to cheer on different Wreckers teams. The traditions that come from the competitiveness and spirit of sports are finally back and on display for the community.

The football team is finally under the lights again on Friday nights. Captain Ryan Thompson ’22 is excited to be back doing the small traditions that make the program special. Now that they are using the locker rooms again, he feels a sense of normalcy.

“Using the locker rooms at halftime, although such a common tradition, is very important to our team,” Thompson said. “The talks and memories we have in the locker room make the season so fun.”

Traditions have been a part of every team for several years, for example, pasta dinners. Last year, the track teams were deprived of these pasta dinners the night before their meets. Captain Rory Tarsy ’22 did not enjoy this change.

“I miss the food we ate before each meet,” Tarsy said. “It was a great way to carb overload and get ready for tomorrow’s big competition.”

Additionally, girls’ soccer team captain Gaby Gonzalez ’22 missed the team bonding activities they usually had, but couldn’t do last year. Whether that was hanging out at someone’s house or getting food at restaurants as a team, it was something that they all cherished.

“Last year’s season took away some of my favorite parts of the season, the off the field team camaraderie,” Gonzalez said.

She hopes to make up for last year by having a lot of team bonding events this year.

Between every sport, the traditions that were missed in the past year vary, but all teams are anxious and excited to be able to make up for lost time.