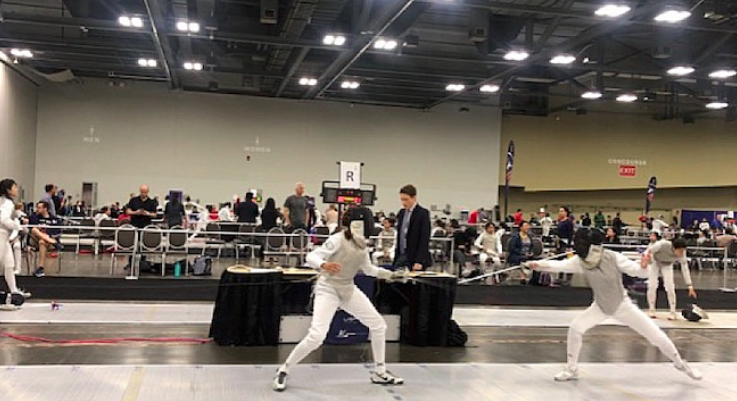 Photo of Anna Pan ’22 fencing for her club team. She is one of the four staples students to bring fencing to staples.

Anna Pan ’22 was the first to bring the idea to Staples. The idea came to her when the COVID-19 pandemic hit and some of her friends started finding new hobbies. Pan, who had been fencing for years, wanted to bring the sport she loved to Staples. She had tried to start it herself, but her original plan was shot down by the school. In turn, she teamed up with her other three co-founders, and the team is now up and running for a 2021-22 season.

“I started with logistics of the fencing team at the end of my sophomore year, then introduced the idea to Staples at the Staples beginning of my junior year,” Pan said. “And now in my senior year, we finally are executing it.”

The four captains main purpose in starting Staples first varsity fencing team is to grow the fencing community and provide another sport someone can take interest in.

As of now the team has about nine members and the captains hope that by the beginning of the season that number will increase. Since fencing is a singular sport, there will be a varsity and a junior varsity team.

“The majority of our attention this season will be focused towards training new recruits; however, our goal is to ultimately win states, which even in our current state, I feel we have a pretty good chance at,” Piterbarg  said.

Although most of their schedule is TBD, according to  Syomichev , the practices and matches that they do have on schedule will all lead up to the two final competitions, the Connecticut Novice and states.

The captains are ready to share their love for the sport with the rest of the students at Staples.

“As someone who is extremely passionate about fencing,” Piterbarg said, “I want my fellow peers at Staples to experience the same great things I have, and find an appreciation for the sport.”