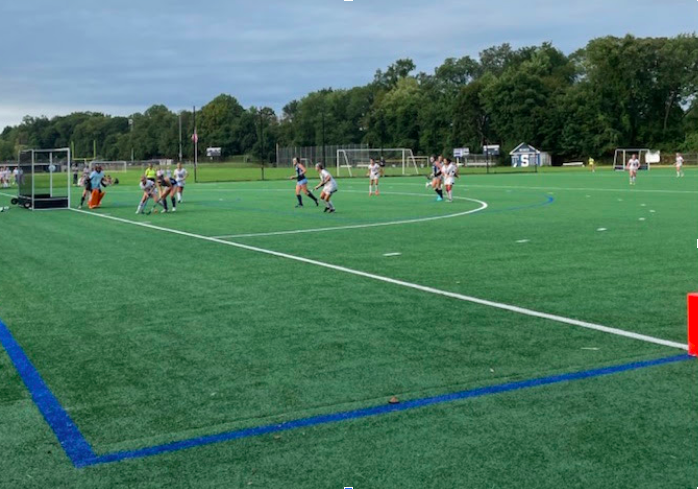 Staples offense battles for a shot on goal in Wilton territory in an effort to increase their 2-1 lead.

The Staples girls’ field hockey team tied Wilton 2-2 in their first major trial of the season on Sept. 14. Wilton forced the game into an overtime defensive showdown with a late goal in the fourth quarter.

The Wreckers seemed to have came away with a win until a late whistle blow as time expired, prompting a penalty shot. Striking the ball past goalie Ella Williams ’22, Wilton scored the tying goal, sending the game into extra minutes.

“The stroke was really unfortunate,” Ava Ekholdt ’22 said. “Going into overtime, we needed to play smart, slow it down, get good passes, and try to get a good goal.”

With both teams downsized to six field players and a goalie in overtime, Staples placed an added emphasis on protecting the goal and capitalizing on fast breaks.

“We needed to keep up our strong defense, focus on getting back, putting pressure on top, and getting the ball to the goal,” Lily Harrington ’22 said.

In the end, between both lineups, stagnant offense could not overcome defensive prowess. Defense reigned supreme in a game of uncharacteristic showings of offensive struggles for the Wreckers, who scored 14 total goals in their two previous games.

“We were hoping to move the ball a little bit better, being the first to the ball, and being aggressive,” Ekholdt said.

After a scoring drought, and with nine minutes remaining in the second quarter, Emma Larit ’25 passed the ball to Tyla Ozgen ’25 to put the Wreckers up 1-0.

Capitalizing on a corner shot late in the third quarter, Ozgen again scored, her seventh goal of the season.

The two goal lead lasted all but four minutes as Wilton snuck a strike past a diving Williams.

The Wreckers face two undefeated top contenders next in Ridgefield and Darien on Sept. 20 and 22, respectively. The 2-0 Ridgefield Tigers are coming off an overtime victory against Greenwich while the Blue Wave have shut out their opponents for a 2-0 overall record.

In spite of the tie, Harrington is confident the team will bounce back as they prepare to face off against their fellow heavy hitters.

“For us, we just need to continue the things we did this game with the baseline runs and looking at the players on the inside,” Harrington said. “We’ll fix everything we need for the next few games.”