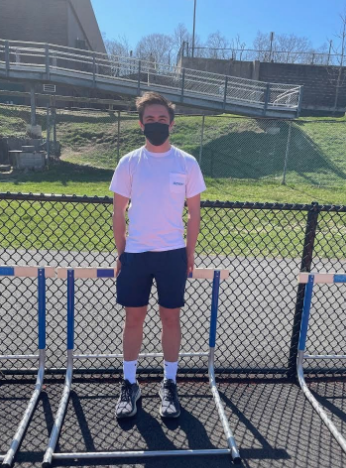 Ben Berkley ’22 has been the track and field manager for the past two years, after being a runner on the team his freshman year.

The success of Staples sports teams starts behind the scenes with the managers. From setting up fields, to helping the coaches with any tasks, to keeping score, the managers are busy with their position on the team despite not playing the sport.
Ben Berkley ’22 is the boys track and field manager. He used to be on the indoor track team his freshman year, but he didn’t enjoy competing so he decided to be the manager.
“It seemed like a great position, because I could still be part of the team and participate in some workouts, but I wouldn’t have to compete in the meets indoor,” Berkley said.
Rachel Varsano ’21 had a similar situation. She used to play on the girls’ soccer team for two years and was not ready to give that up fully.
“Gsocc brought me some of my closest friends and memories of high school,” Varsano said. “The work it takes to play is intense and it’s been great to experience that both as a player and manager.”
The job of a manager is hard work. Berkley and his co-manager Sam Zuckerman ’21 are kept busy with many different tasks.
“We set up the events and help clean up the field house after the meet, take attendance… [and] we also help the coaches set up equipment for practice like pits for pole vault and high jump, and keep track of times for time trials and other running workouts on the track,” Berkley said.
Varsano has a different position on the girls’ soccer team. She is in charge of tweeting for the team.
“I work with Barry (coach) and Shira (other manager) organizing rosters, keeping track of the score sheet, and my personal job was tweeting,” Varsano said. “It’s so fun to shout people out and see the collection of amazing work the team has done.”
The managers have been able to catch special bonds among teammates that usually aren’t seen by the fans.
“What I love most is taking pictures and videos of moments no one else can capture,” Varsano said.
Varsano is thankful for her position as manager because she has been able to be a part of her community that she loves.
“Gsocc was the first ‘little community’ I was a part of at Staples,” she said, “and it has taught me so many things.”