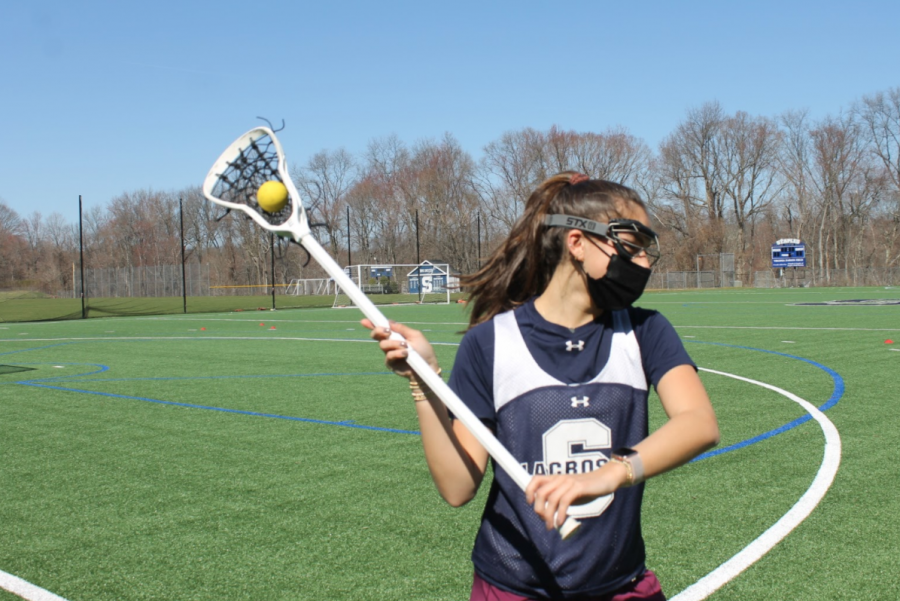 Girls’ lacrosse captain Julia Diconza ’21 gears up to pass the ball at tryouts for the 2021 season.

Connecticut is springing forward into a new season, and with that, a new season of sports is beginning too.

Spring sports practices began on March 27, with first contest dates on April 10, and final FCIAC competitions are due to happen on schedule in late May and early June.

The CIAC announced that spring sports will have the same mask rules as fall and winter sports; masks must be worn except during active competition. Boys’ volleyball will be the only team that is required to wear masks at all times, including on the court.

With warm weather coming, the idea of unmasking is tempting, and some Staples students like Jared Even ’24, who is trying out for the boys’ tennis team, feel that loosening restrictions on mask-wearing could be completed safely.

“I think that masks should be worn when people are close together,” Even said, “but it isn’t needed in games when everyone is playing and spreading out.”

Gabby Lantier ’22, a member of the Staples softball team, also feels that for her sport, safe playing could be achieved without the use of masks at certain times.

“Because softball is a sport where our positions are so spread out, I think we would be able to function in a practice setting without masks,” Lantier said. “But they still should be required when we are unable to maintain a six-foot distance like in the dugouts.”

The CIAC 2021 spring sports plan, released on March 10, hinted at rule changes that could happen throughout the season suggested by the Connecticut Department of Public Health, such as the possibility of relaxed mask-wearing during outdoor sports with intermittent or infrequent contact, but did not specifically state when this could happen.

Captains of spring sports teams such as Shira Parower ’21, girls’ lacrosse, are trying to keep their teams positive and motivated even with this unpredictable season.

“Just by taking it one day, one practice, and one game at a time,” Parower said ’21. “We won’t take anything we get for granted and we just want to have as much fun as possible and make the most that we can out of this season.”

With certain COVID-19 restrictions, Even feels that this could inhibit his ability to make friends on the new team, even with frequent contact with teammates.

“I think overall there shouldn’t be too much of a drastic change because there’s still daily practices and at least weekly matches, so I think that’s good,” Even said. “But I think especially for freshmen who don’t know as many people, masks and social distancing and that kind of stuff could limit exposure to new people.”

Restrictions on athletes this season are still heavy, but the COVID-19 cloud is slowly lifting, and with the support of each other, many feel that they can have one of their best seasons yet.

“We are all going to be there for one and other to pick each other up whenever we need it,” Lantier said. “There’s not a doubt in my mind that this season will be just as enjoyable if not more than previous seasons, and I just can’t wait to get the ball rolling.