Staples wins in a shutout vs Wilton 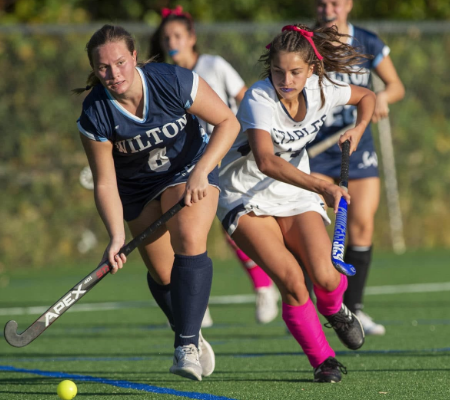 Julia Diconza ’21 goes to the goal in the game against Wilton. Staples won with a score of 7-0, bringing their record to 3-0.

The Staples girls’ field hockey team beat Wilton 7-0 in their home matchup on Oct. 9. In the second half of the game, Staples captured five goals to secure the win.

“In the third quarter we were able to use all of our players to build up our attacks as the ball went down the field,” Francine Stevens ’23 said, “which gave us a lot more opportunities to take shots and score.”

The game began with a slow start. Julia Diconza ’21 and Maya Reiner ’21 eventually came through with a goal to end the first quarter. After halftime, the Wreckers came out at full speed. Three more goals were scored within the third quarter by three different players: Lily Harrington ’22, Francine Stevens ’23 and Lanie Ambrose ’21.

The Staples defense also stood tall during this game, putting up a strong front. Captain Izzy Deveny ’21 shared their defensive tactics for this game.

“Our tactic for defense was to shut down their offensive plays as quickly as possible by reading their passes and intercepting the ball before they got the opportunity to score,” Deveny said. “Then after intercepting it we would try to pass the ball around the back and start to move the play upfield on offense.”

The Staples offense tired out the Warriors defense in the second half of the game and ultimately the game ended with a 7-0 win over Wilton. Staples goalie Ella Willams ’22 shared her hopes for the rest of the season.

Going into this game, the Wreckers stood at 2-0, beating Danbury both away and at home. Due to COVID-19, the season has been shortened to no tournaments and a limited season overall.

“One of our goals for the season is to win as many games as we can because we don’t know when our season could end,” Julia Diconza ’21 said.

After this win, the Wreckers are set to play Wilton again on Wednesday Oct. 14 at Wilton High School.