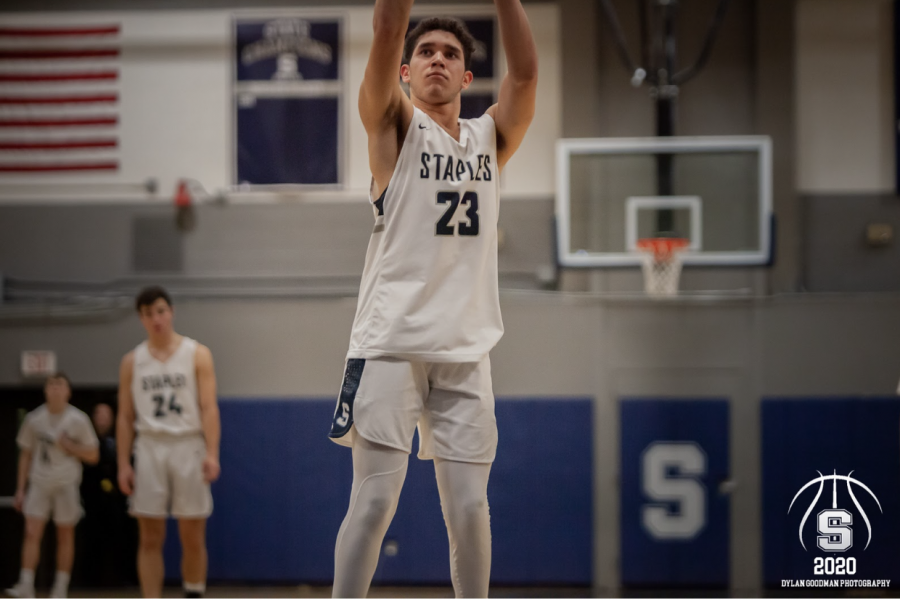 The Wreckers boys' basketball team pulled out a 72-65 win in a season-deciding game on Feb. 26 against Wilton sending them into FCIACS.

The Staples boys basketball team pulled out a 72-65 win in a season-deciding game on Feb. 26 against Wilton. The Wreckers record prior to the game was 13-6. The game was important to the Wreckers because they needed to win in order to qualify for the FCIAC tournament.

Led by coach Colin Devine, Staples started strong, winning the first two quarters. Wilton almost tied the game up near halftime, but Staples kept the lead. In the first half, both teams were in double bonus with over 10 fouls each.

“I thought they had an extremely good game,” Mia Gonzalez ’20, a fan, said. “I thought the team handled the pressure really well.”

The teams fought back and forth, Staples keeping a pretty steady lead. At the end of the 3rd quarter, Staples lead 54-40. But as the end of the game neared, Wilton started to fight back.

With five minutes left in the 4th, Wilton made it a 10 point game. Staples player Teddy Dienst ’20 stepped up and hit a three to increase the lead.

The last four minutes seemed to last forever as Wilton fouled more and more to stop the clock.  It turned into a tight eight-point game.

Staples made most of the free throws, extending their lead, and ultimately, Wilton just couldn’t keep up.

Staples Captain Jake Thaw ’20 had mixed emotions about the win.

“I thought the game went well but we’ve got a lot to clean up ahead of Saturday,” Thaw said. “Wilton was pretty beat down with injuries but anytime you beat a team like them, it’s a good win.”

Staples played against Fairfield Warde at on Saturday, Feb. 29 for the FCIAC quarterfinals. Warde beat Staples 51-44, knocking them out of the tournament.