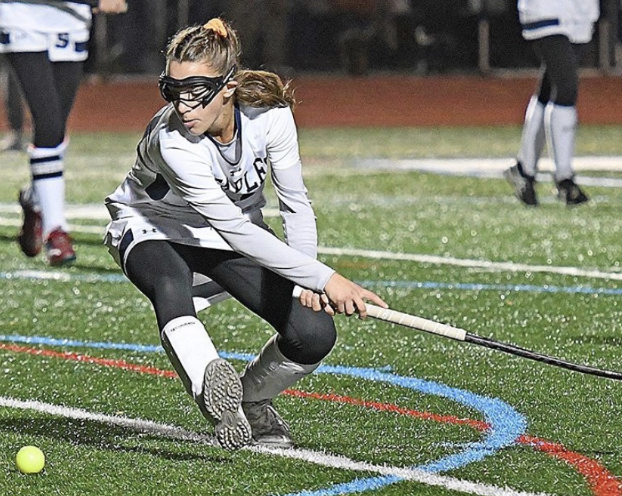 Jess Leon ’22 in full speed during the semifinals game against Norwalk at Weston high school for the win. Staples beat Norwalk to advance to the state championship.

The Staples girls’ field hockey team beat Norwalk 3-0 in the semifinals on Nov. 19 at Weston High School. Winning this game put them to the next level of the state tournament, which is the championship game.

Going into this game Staples was the number four seed and Norwalk was the number nine seed. During the regular season games Staples was able to beat Norwalk 4-2. The Wreckers and Bears were scoreless in the first half, but the Wreckers were able to score three goals in the second half to secure the semi-final win.

“This was a really great win for us, but we still have much more to overcome,” Ava Ekholdt ‘22 said.

Throughout the first half Norwalk came out strong, but the Staples team knew how to tire them out. Although Staples did not score, the ball was on the offensive side most of the time. There was rarely a time that Norwalk was in full possession of the ball. Staples was unable to get that tap into the goal during the first half but really showed their hard work during the first half.

The first goal of the game was scored by Julia Diconza ’21 and assisted by Kyle Kirby ’20 in the first few minutes of the second half. Staples defense made a great clear up the side to get it in Kirby’s possession which brought Staples to their 1-0 lead.

“The win feels really good because we earned it. We played with composure and used give and goes which Ian was really happy about,” Diconza said. “With this win against Norwalk and how we played as a team we feel really confident going to the state championship.”

The second goal of the second half was scored by Kirby. She was able to go past many of the Norwalk defenders to get a great shot on goal.

The Staples defense, includingErica Fanning ’20, was effective in limiting the amount of shots Norwalk had on goal. Goalie Roxy Augeri ’20 only had to make one save throughout the game.

Lastly, the third goal was scored by Maya Reiner ’21 and assisted by Kirby again. This last goal secured Staples in their 3-0 lead to finish off the game.

In a rematch of the FCIAC championship game which ended 0-0, the Wreckers will now be taking on the number three seed Darien again for the state championship this Saturday, Nov. 23.