Field hockey team advances to next round in states 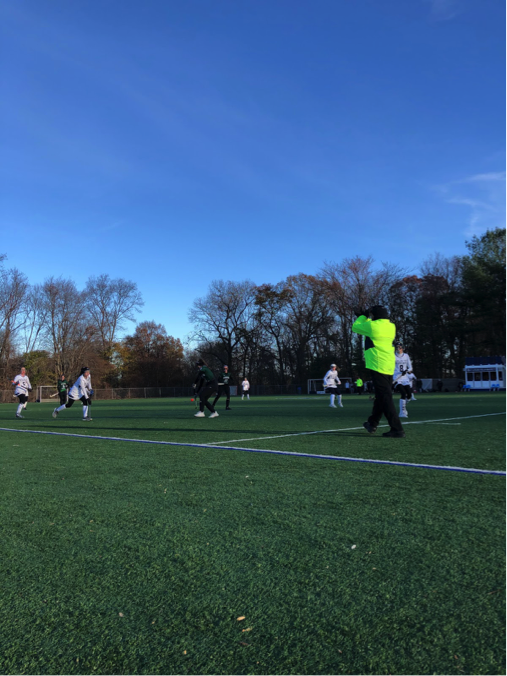 The Wreckers headed into states with a record of 13-1 and the one lost being to Darien. The Wreckers played Darien again in the FCIAC championship game, going into double overtime and ending in a tie. The Blue Wave and Wreckers were announced co-champions.

The Staples girls’ field hockey team beat New Milford 4-1 in the first round of states on Nov. 13 at Ginny Parker Field. The Wreckers came into the tournament as the fourth seed while the Green Wave was the 13th seed.
Jess Leon ’22 started the momentum of the game for the Wreckers. The Wreckers defense was able to clear the ball and transition it up the field to Leon to put them on the scoreboard: 1-0.
“We went into the game knowing this was the start of our path through states. After getting the goal, it made our adrenaline start flowing and our confidence to rise,” Leon said.
Julia Diconza ’21 and Hannah Paprotna ’19 added two more goals in the first half. The Green Wave were able to sneak a goal past goalie Roxy Augeri ’19 who had many saves throughout the game. Heading into the second half the Wreckers were up 3-1.
“Going into the game are strategy was sticking to our game and playing the Staples way with composure,” Diconza ’21 said.
The second half consists of many corner shots for Staples. With many close scoring opportunities by Izzy Devaney ’21, Julia Diconza ’21 and Emma Ashe ’21. The Green Wave’s goalie and defense was strong throughout the second half.
With seven minutes remaining in the second half captain Kyle Kirby ’20 stole the ball from the Green Wave’s defender, made a move and shot and scored. Kirby put the Wreckers up 4-1 which concluded the game.
The Wreckers will take on the fifth seed, New Canaan on Nov. 15 or 16 at Ginny Parker.
“I think the team played good but it definitely was not the best we have played,” Erica Fanning ’20 said. “For our next game, we need to bring a higher intensity and really focus on working together, especially since it’s against a much tougher team than today.”