Staples soccer starts their road to the championship 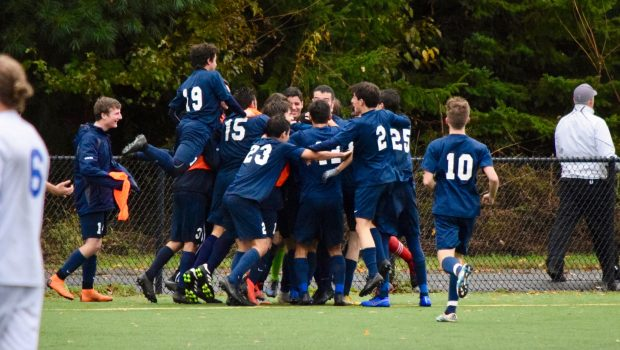 Once the final whistle blew for the Staples Wreckers boys’ soccer team vs. Wilton on Oct. 28, the regular season became an afterthought. All effort and energy will be put toward their first playoff game.
In the final four games of the season, the Wreckers were able to collect three wins against St. Joseph, Westhill and New Cannan as well as a tie against Wilton in their season finale.
“Were hoping to bring this momentum into the playoffs. Taking three out of the last four games was really big for us,” captain Sam Liles ’20 said.
Although the Wreckers have been performing well during games, success starts during practice.
“We have been waiting for this moment since we started training in the summer. Every day we go into practice like our next game could be our last, now it actually could be,” Patricio Perez Elorza ’20 said.
Throughout practice, the team does situational drills such as three-on-twos or two-on-ones in order to mimic playoff-type situations.
The team will be using the short break before the first playoffs to improve certain parts of their game.
“We got to focus on placing our shots more. We need to be more efficient with the shots we’re given,” Lars Djuve ’20 said.
As the bracket came out Monday night, Staples was ranked sixth in the FCIAC tournament and will look to take down third seed Danbury at Danbury High School on Oct.31.