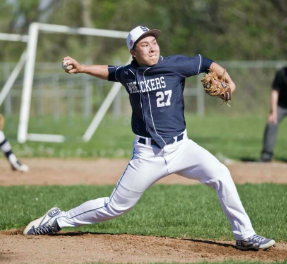 Chad Knight ’19 is in the middle of his delivery as throws against Brian McMahon High School at McMahon.

It was a rough ending to the season for the 2018 Staples Wreckers baseball team, especially for the seniors, where they fell to Darien in the FCIAC finals one year after winning the state championship. Shortly after, In the state tournament, the Wreckers weren’t able to defend their title as they lost 4-3 to Cheshire in the Class LL state quarterfinals.

As the new season comes around, the team is preparing to replace the fire power that a lot of last year’s seniors brought.

Although the team lost a bunch of seniors, the Wreckers still feel confident in their skills and the members of the current team. Part of that confidence comes from how much work they have been putting in through the offseason to prepare themselves for the upcoming season.

“We have all been together, whether its lifting or our offseason clinic in SONO,” Chris Veneruso ’19 said. “In my opinion is very important if we are looking to go out and accomplish our very ambitious goals.”

One goal of the offseason clinic is to build up team character and help the players grow as a team.

“I think that we have great chemistry and that is something that I think we are better at than other teams in the state,” Zach Zobel ’20 said.

For the season this year, the team has high expectations.

“Our goal is to win both States and FCIACS,” Lawrence said. “We have the talent and the drive to accomplish this.”