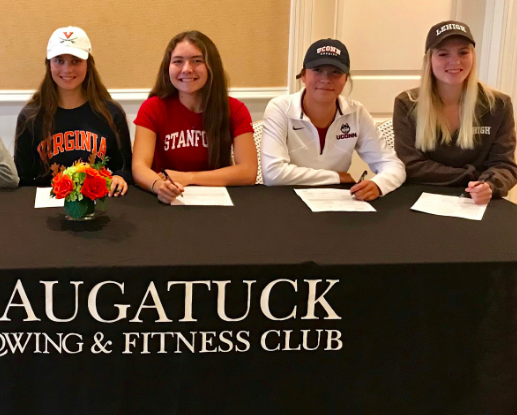 The four girls from SRC signing their letters of commitment to the various colleges.

It’s 5:30 in the morning on a Tuesday. The pitch black sky envelops the quiet streets of Westport. While other teenagers are sound asleep, the girls of the Saugatuck Rowing Club are wide awake, breaking a sweat in the gym or on the boat. And now, for a select few, every minute of exhausting and rigorous practices comes with a true reward: an official commitment to college for the sport they’ve dedicated their lives to.

Four Staples girls, Addie Hogue ’19, Noelle Amlicke ’19, Mari Sachs ’19 and Parker Cuthbertson ’19, signed their letters of intent to their respective colleges for rowing on Nov. 14. The hard work they’ve exerted for years at the Saugatuck Rowing Club (SRC), the girls say, has made their college rowing aspirations a reality.

“Rowing in college has always been a dream for me,” Cuthbertson said, who will row at the University of Virginia next year. “I just find myself more and more excited each and every day I come to practice and I want to carry that excitement into college with me.”
Though Amlicke is headed to Stanford University to row next year, she started off five years ago not knowing how successful she would be in such a competitive sport.

“Back when I first started in eighth grade, I didn’t know if I was cut out for the sport and its intensity,” Amlicke said. “But after seeing the kindness and dedication of the girls at SRC, I no longer doubted that it was the place for me.”

While she is looking forward to the bright future that Stanford has to offer, Amlicke considers her team at Saugatuck not only friends but family.

“We train so much together that we have become a really tight-knit group and kind of like a second family,” Amlicke said. “It’s a really motivating place to be because everyone at SRC always pushes themselves to the limit.”

Hogue will be rowing at Lehigh University next year and can’t wait to continue the sport she fell in love with in eighth grade because of the dedication and exhilaration of racing.

“I love the feeling of racing,” Hogue said. “It’s super rewarding and shows that the sport is a direct cause and effect if you put in the work that your teammates are trusting you to do, then your boat will become the best that they can be.”

In addition to the rowing aspect of her college experience next year, Hogue is excited for the independence and exploring projects she’s passionate about that Lehigh has to offer.

“Going to college and learning about who I am personally and having more freedom to explore my personality is so exciting to me,” Hogue said. “I can’t wait to learn what I’m good at and what I want to pursue in life, and I feel like a lot of that starts in college. To me, college is largely about self-discovery and starting to get a sense of who you are and who you want to be.”

The last of the SRC girls who signed is Sachs, who will spend her next four years rowing at The University of Connecticut. Just like her fellow teammate, Sachs has appreciated the true camaraderie formed with the other girls.

“Whatever happens on the water stays on the water,” Sachs explained. “Especially for me, I forget everything else, it just melts away when I’m at practice. If I’m having a bad day, I just put the anger on the oar.”

As for her college years, Sachs awaits a new life.

“We’re all excited for new experiences and new environments to submerge ourselves in,” she said. “I’m especially excited to get to know everyone on my new team at UCONN, make some new friends and to have a home away from home.”

Though their rowing journeys started at one club on the Saugatuck River, these four seniors will be spending their college years thousands of miles from one another. Nevertheless, they’ll never forget the place where their start as rowers began.

“It has been incredible to get to see this collective hard work pay off at big races like the National Championship each year,” Amlicke said. “It has definitely been a huge time commitment in my life, but it has been worth every second of it.”