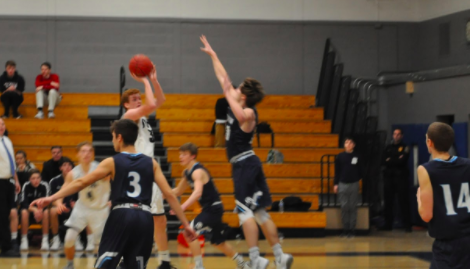 The Staples boys’ basketball game against Wilton resulted in a tough loss with a score of 85-65 at the Staples gym on Tuesday, Jan. 9.

“I thought our offense went as smoothly and efficiently as it had all year and scoring over 60 points is no small achievement,” forward Tristan Hochman ’18 said. “Wilton shot over 80 percent from behind the arc, and when a team is that hot, it’s really hard to overcome.”

In the first quarter, both teams had a number of great shots. Max Sussman ’18, was a standout, seeming to make every shot that was passed to him. Wilton just seemed to find the back of the net more often. At the end of the first quarter, Staples trailed Wilton 30-16.

In the second quarter, Staples continued with their aggressive offense. Wilton was able to draw a lot of fouls which widened the gap in the score to make it 52-31.

Following halftime, the Wilton team came on even stronger, taking a 25 point lead with a score of 70-45.

For the final quarter, the Wreckers played the full roster and the bench was able to outscore Wilton in the final minutes in the game, but there was not enough time to bring in the win. The Wreckers lost with a final score of 85-65.

“For our next game we need to rebound better and be better defensively as a team,” center Stedman Van Arsdale ’18 said. “We can’t give up second-chance points, especially to a team like Wilton or Trumbull if we want to win.

The Wreckers’ next home game on Friday, Jan. 19th at 7:00pm against Greenwich.