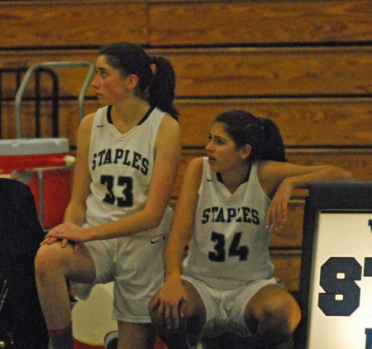 By: Alexandra Sprouls ’19 and Hannah Bolandian ’19

Strong bonds of friendship that can last a lifetime are often made through the competitive atmosphere of sports. For siblings, their existing bond often grows stronger when competing in the same sport, and stronger yet when playing on the same team.

At Staples, many pairs of siblings partake in the same sport. The close relationships siblings share don’t only benefit themselves when competing, but also benefit their teams.

“[Ginny Gerig and Arianna Gerig] work very well together because they trust each other,” Paco Fabian, the Staples girls’ basketball coach, said; “they both pushed each other to be better players.”

Ginny Gerig ’17 stopped playing basketball after her freshman year and picked it up again as a senior, claiming her sister Arianna Gerig ’20 was the main reason why she chose to play again.

Both of the Gerig sisters cherished the time they spent shooting basketballs outside when they were younger and knew that they would experience similar feelings as teammates this past season. Not only did they practice together, but their diverse skills complemented each other on the court as Arianna plays more offensive positions with Ginny taking on a more defensive role.

“Playing with a sibling is an extremely unique experience. Although we could sometimes fight we were always each other’s biggest fans and she was a big source of my inspiration to play. If I could do it all again I would love to play with her again,” Ginny Gerig said.

“Watching my brother run at really cool tracks and meets has been really motivating, which has made me want to work harder,” Zarah Ahmad said.

They are both fierce competitors with Zarah Ahmad placing sixth at FCIAC in the 1600 meter during outdoor track as a freshman and her brother being named Gatorade Track Athlete of the Year as a senior.

With both Ahmad siblings running competitively, they spend more time together than they did before and help each other develop their skills off the track, which has positively influenced their performances.

The Gerig sisters similarly help each other off the field to further develop their techniques. “[Practicing with Ginny Gerig] helped my skills and development as a player,” Arianna Gerig said.

Grace McGinley ’17 and Kelsey McGinley ’18, are two sisters who have also experienced the pros and cons of playing the same sport as a sibling. They both competitively row for the Saugatuck Rowing Club. When they began participating in the sport, they didn’t row together, but are now both in the Varsity eight boat.

“I think being on the same team with my sister is difficult when we have a frustrating day at practice because we can’t just take it with a grain of salt. Instead, we talk about it on the drive home, which can be very frustrating,” Kelsey McGinley said.

During rowing competitions silence is required, leaving little time for bickering or even encouraging in the eight boat, but when they row together they collaborate to advance each other’s abilities.

“Kelsey and I will go out in a pair a few times a year, which is just two people to one boat, and that forces us to improve our technique. You can get away with a lot in the eight boat, but not so much in the pair,” Grace McGinley said.

The McGinley sisters agree that being in the same boat has not made their rowing experience significantly different than the other rowers in their boat. This is due to the strong bond the group has created by working together for over three years. “I am just as close with them as I am to [Grace], so I think all of us can turn to anyone for support,” Kelsey McGinley said.

The pair has won many prestigious rowing awards including Grace McGinley being named National Junior Rower of the Year in 2016 and Kelsey McGinley coming in third at the World Indoor Rowing Championships this past February. With both McGinleys in the eight boat, it has won the Youth National Championship and the Head of the Charles Regatta twice along with setting a course record. Their eight boat has been undefeated for three years thus far, which is the longest winning streak in junior rowing history.