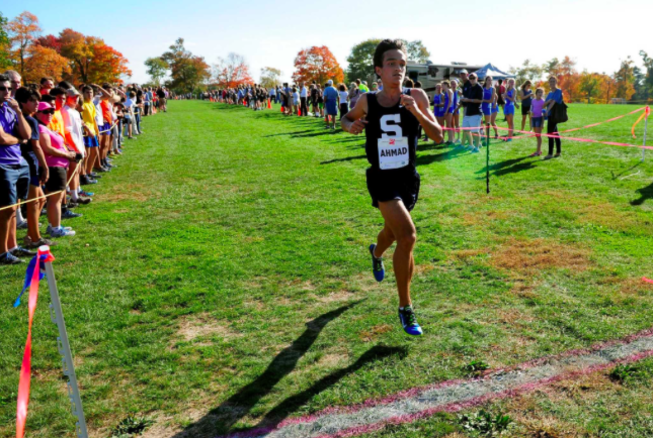 Zak Ahmad ’17, who placed first at indoor track FCIACs and States,  has been named Gatorade Track Athlete of the Year in Connecticut for his performance on the boys’ cross country team at Staples.

The Gatorade State Player of the Year is used to recognize high school athletes across six different sports: football, cross country, basketball, soccer, baseball and track and field. Athletes are recognized for their athletic excellence, academic achievement and exemplary character.

“It’s definitely an honor to be a part of the group of athletes who have won this award,” Ahmad said. “My teammates, my friends, my parents, and my sister, have all been really supportive of me and are the reason I am where I am today.”

Ahmad raced at the State Open Championship this past season with a time of 15:46. He also won the Class LL State championship by coming in at 15:49, which allowed him to be named the individual champion; the Staples team was named the overall team champion.

Along with these state titles, Ahmad placed first in FCIACS and third at the New England Cross Country Championships and the team finished in first overall. He also came in sixth at the Nike Cross Nationals Northeast Regional championships.

However, Ahmad was forced to train excessively with his team in order for them to gain all of these titles. “I trained daily with my team doing a mix of speed workouts, long runs, and recovery runs with the help of our coaches,” Ahmad said.

Ahmad’s hard work has impressed his coach, Laddie Lawrence. “Zak is one of the best who has ever run for Staples High,” Lawrence said. “He’s a knowledgeable, dedicated, and determined competitor who has a true love for the sport.”

Ahmad looks to once again be able to race at a high level this upcoming year,. “This year in track I’m looking to compete on the national level both with the team and as an individual,” Ahmad said.
Once he graduates, Ahmad will be attending the University of Pennsylvania where he will compete in cross country and track and field.