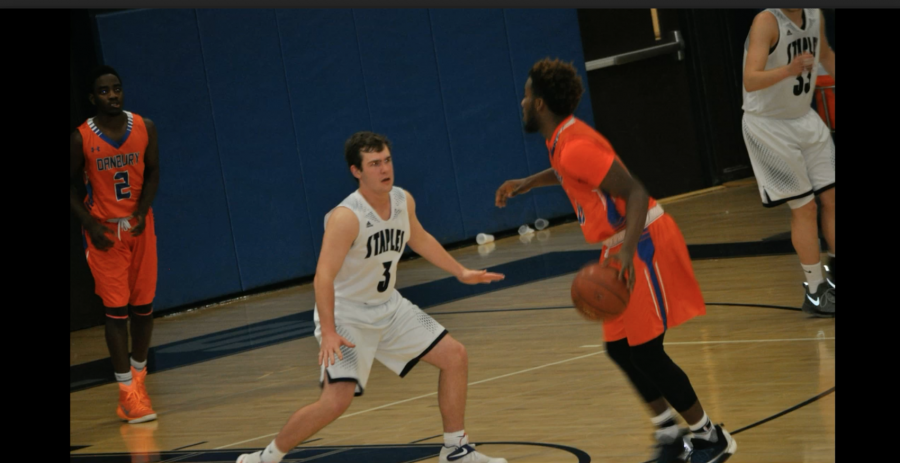 Boys’ basketball vs. Danbury from Inklings News on Vimeo.

Staples boys’ basketball defeated the Danbury Hatters 58-44 on Tuesday evening.  The win helped them improve to a record in the FCIAC of 1-1, and helped them to reach a 3-3 overall record.

The Hatters got off to a quick start leading 14-7 after the first quarter. However, the Staples offense came alive in the second, and the Danbury lead quickly evaporated. Nearly three minutes into the quarter the score was tied up at 16-16.

Sean Pritchett ’17 scored 5 in the second quarter, a total of 12 for the game.  Justin Seideman ‘17 scored 6, while Max Sussman ’18 knocked down 3 three pointers. Meanwhile for Danbury, Chris Torres and Jordan Alleyne each had 3 points in the quarter. Alleyne scored 12  total.  However, the Wreckers with their offensive surge were able to gain control up 31-24 at halftime.

Third quarter was much of the same for the Wreckers who managed to increase their lead just a little more. High scorers included Seideman who had 7 finishing with 23 on the day, and Sussman who had 3 by making another three pointer, he finished the game with 5 three pointers for a total of 15 points.  Cameron Snow of the Hatters added 5, and the score was 45-34 going into the 4th.

In the final quarter Staples was able to hold onto their lead with strong defense, only giving up 10 points, and scoring 13 as a team to win.

Guard Gabe Wick ‘19 said after the game, “ I thought we rebounded well and played together and unselfishly on both sides of the ball offensively and defensively.”

The Wreckers’ next game will be Friday Jan. 6 against Fairfield Warde at home. They will look to improve to 4-3 on the season.