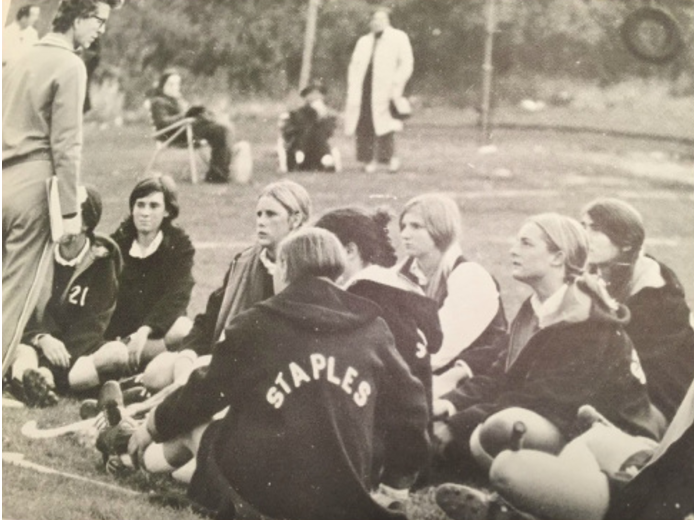 By: Camryn Ragland ’18 and Alexandra Sprouls ’19

On a November morning in 1974, Staples super fans crowded the bleachers to watch their school’s field hockey team play in its first state championship game. The varsity team, led by Coach Virginia (Jinny) Parker, battled a tough game ending in an unfortunate 1-0 loss against Simsbury.

However, this loss did not faze Coach Parker, as she continued to push the team to do their best throughout the following six seasons of her Staples coaching career. Her Staples field hockey record from 1955 to 1980 was 193 wins, 44 losses and 28 ties. She also led the team to be FCIAC champions in 1976, ’77 and ’80, as well as state semifinalists in 1979-80.

“Jinny was a strong woman and coach; her work ethic and determination was idolized by my team,” Sophie Smith ’18, Staples field hockey player said.

Unfortunately, Parker passed away July 9, 2015. Her legacy did not die with her, however. Just that year, Coach Ian Tapsall took over the varsity field hockey team, and left another legacy with the program by earning the 2016 state championship title.

Current Staples field hockey coach, Ian Tapsall, credited the state title to the hard work of the athletes. “We had many returning players but they were much fitter due to an intensive team pre season workout plan. They also had the opportunity to attend local clinics pre season which weren’t offered last year,” Tapsall said.

The change in coaching has been apparent in the successful results of the team this past season. The field hockey team achieved an undefeated regular season, earning them a place in the FCIAC championship game, as well as a win in the state championship game.

“The amount of dedication from my teammates and I has shown in the past months, and I think that winning the Class L State Championship shows that Staples Field Hockey is a strong program that is on the rise.” Smith said.

Coach Parker attempted many times, but was never successful in earning a state championship title for Staples. However, her efforts have not been overlooked. In 1976, Coach Parker earned Coach of the Year from the Connecticut High School Coaches Association. In 2002, Staples honored her legacy by creating the Virginia E. Parker playing field which the Staples field hockey team cherishes and credits to their successful season.

“It’s no secret that Jinny is admired by Staples field hockey. She has had a large impact on this season as a whole. Before every game, we do our kiss and wave to Jinny and Saturday was no different.” Bridget Mulloy ’19, Staples field hockey player shared.

On, November 19, the field hockey team headed up to Wethersfield to take on Darien in the Class L state championship game. Before the game, Nancy Kondub-Harris, a field hockey player from the state finalist team in 1974, shared words of advice with the group.

“Her coach was Jinny, but she said that the team never called her Jinny. They called her ‘Ms. Parker’. She told us a little about Jinny and how everyone respected her. Nobody ever talked back” Meghan Johnson ’18, Staples field hockey player said.

Kondub-Harris not only shared details about Coach Parker, but she also talked to the team about her experience playing on the field at a state championship game.

“Being part of the team that- until now- was the only team to make the state finals was unbelievable.  We were a focused group of mostly senior starters – very athletic and just wanted to keep winning but also to keep playing,” Kondub-Harris said.

Kondub-Harris played field hockey at the University of Connecticut and because of her love of the sport, she pursued it as a career and is currently the field hockey coach at New Canaan High School. Her hard work paid off as she was inducted into the CT Field Hockey Hall of Fame in October 2016.

Kondub-Harris’s words prepared the team to fulfill the goal Parker set out for when she started coaching at Staples, and to leave a lasting legacy on the program.

“I think [Kondub-Harris’] visit was a really great boost to our excitement for the game and we went into it having Jinny looking down and supporting us.” Smith said. Staples field hockey player, Elle Fair ’19 added that “[Kondub-Harris] really motivated us and inspired us to not only win it for ourselves and for our team but all Staples field hockey alumni who have come so close and have not been able to grab the title.”

With Parker by their side, and the support of Kondub-Harris, the team was ready to take on Darien. With two previous wins against this team in the regular season and in FCIAC playoffs, the Staples team was cautiously optimistic. Together they started the game strong, and finished side by side with Darien holding their trophies high as both teams celebrated their successes as state co-champions.

“I would hope for much of the same next season as we are only losing two seniors and our rising freshmen are very talented. The team will be competitive and would expect to be able to solidify our position in the top three FCIAC teams.” Tapsall shared about the upcoming season.