From Saugatuck norms to college dorms 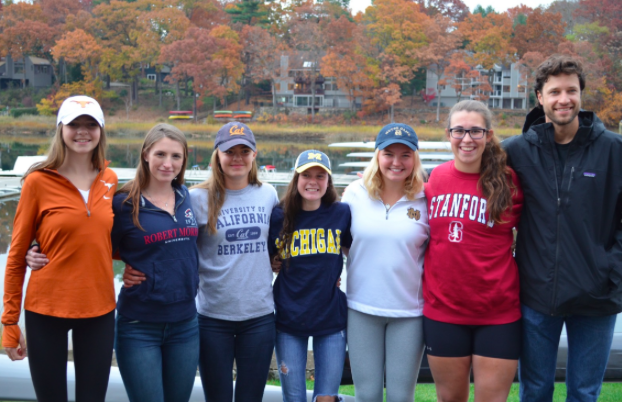 As they step out on the dock, inhaling the clear, misty air, their high school careers flash in front of them. Recounting on all they have achieved and accomplished lights a spark in their minds and joy pulses throughout their body. They take deep breaths and look around to each other, finally having a reason to say, “We made it.”

Six senior female rowers from the Saugatuck Rowing Club signed their letters of intent on Nov 11 alongside their coach Gordon Getsinger, committing to partake in collegiate  rowing.

The college process for athletes is often stressful and agonizing. However, a particular member of the club’s 2017 class found it to be relatively pleasant and enjoyable.

“I started talking to [colleges] junior year, and UC Berkeley has always been my number one choice,” Radcliffe said. “I feel relieved knowing where I am going as I am already getting to know my future teammates which will make the transition to college a lot easier.”

Many of the girls have been participating in rowing for the majority of their lives. Imagining a life without the sport troubles their minds; the rowers question where they would be without it.

“Overall my passion for rowing is unbreakable,” Johnson ’17 said. “Although I have had many ups and downs with the sport, I stick to it because at this point I cannot imagine my life without it.”

The renowned Saugatuck Rowing Club opened in 1990 as one of the first clubs Fairfield County has seen. It’s popularity has grown over the past few decades attracting individuals from different areas. Those who chose to commute from neighboring towns have found value in the community the club offers and the great relationships they have formed with their teammates.

“It’s cool because I almost have two parts in my life and I consider them two jobs. I have a group of friends at school and then a group of friends at rowing which is nice because I can easily escape anything,” Powers ’17 (Ludlowe) said. “I look forward to practices and the team and our coach everyday, and it’s definitely something I could never imagine living without.”

Many of the rowers have served dedication to this sport for many years, and are sanguine to carry out their careers in college. Now having committed, Johnson ’17 believes the whole end to the process can be summed up in a single word.