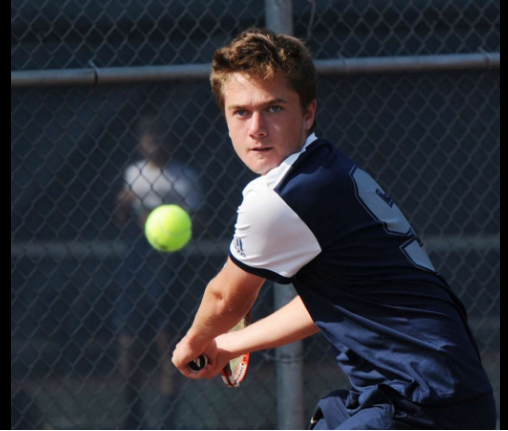 On Wednesday, May 25, the Staples boys’ tennis team defeated the Greenwich High School Cardinals 4-3 at Wilton High School to claim the FCIAC championship. As the two seed in the FCIAC tournament, the Wreckers (19-2) played spoilers to the favored Cardinals (17-2).

This victory is the Wreckers’ third straight FCIAC title and second straight versus Greenwich, topping them 4-0 in 2015.

Most of the juniors and seniors on this year’s varsity team had competed in the previous title matches. “This was the most difficult of the three [championships] by far,” Captain Will Andrews ’16 said. “It came down to just a couple points.”

The Wreckers and Cardinals split the first six matches of the championship, leaving the final match between Max Zimmerman ’17 of Staples and Eric Toub of Greenwich to decide who took home the hardware. Toub had previously defeated Zimmerman on April 18 when Greenwich defeated Staples 4-3.

“I told myself that I would give it my all if I ever had the chance to play him again,” Zimmerman said. Zimmerman ultimately ended up on top, winning in three sets and leading the Wreckers to victory.

Despite the significance of this rematch between Fairfield County powerhouses, neither team is done; both will move on to the Class LL CIAC playoffs, where the Cardinals and Wreckers are ranked as the two and three seeds, respectively.

Staples won the 2014 Class LL state championship, but lost in the finals last year to Amity High School, this year’s top ranked school. Despite this, the players are unshaken.

“We’re going in confident and playing well as a team,” Jay Mudholkar ’17, a three year varsity player, said. “We know if we all play our best tennis we can kill it.”

The Wreckers have yet to receive their draw for their first round game; preliminary action is set to take place on Saturday, May 28. All Class LL State Playoff competition is held at Yale University in New Haven.

Correction: The original article published said the day was Monday, May 25 when in actuality it was Wednesday, May 25.