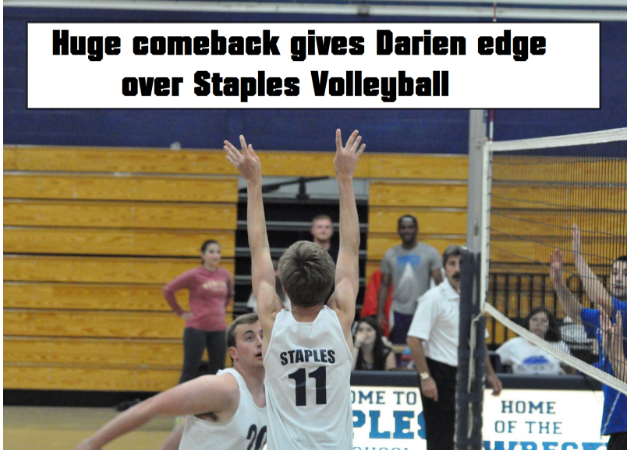 “I really thought we had it,” Andrew Van Riper ’16, starting libero for Staples High School boys’ volleyball, said following their match on Monday. Staples fell to a come-from-behind win by Darien 2-3 in sets.

The Wreckers came out of warmups fired up, and found themselves in an early lead. With powerful kills from both Keiran Simunovic ’16 and captain Jared Himmel ’16, Staples  managed to hold on to their marginal lead and finish the first set 25-21.

Things got a little more interesting in the second set, and with Van Riper’s defense Staples built up a 9-7 lead. Staples went on to push their run with a block by Simunovic, and another kill by Himmel set Staples up for game point on 24-21.

Darien wouldn’t make closing the game out easy for the Wreckers as they went to go on a 4-point-run which prompted a Staples timeout. Staples came out of the timeout fighting and after a magnificent set from Kenny Brill ’17 to brother captain Daniel Brill ’16, Staples won game two 28-26. “The comeback they put up in game two was so exciting, the crowd couldn’t get enough.” spectator Liz Hogan ’16 said.

However Darien pushed back hard in the third set. Ryan Angerthal ’16 had a massive diving dig and the gym erupted in cheers when Himmel converted for the kill. It was not enough to pull through with the win in game three as Darien finished it off with back-to-back kills from their middle hitter, putting the score at 23-25.

“It was a great team effort from everyone. I think we got a little ahead of ourselves,” Daniel Brill said.

Despite good blocking efforts by John Fincher ’16 and Simunovic, the fourth game was dominated by the Blue Wave, as Staples failed to grab a lead or tie all set. Quality setting and passing kept Staples close, but Darien pulled through 22-25 and sent the match into a fifth set played to 15 points.

The final set was defined by mistakes. Staples gave up double-touches, missed serves, and hits out of bounds. Darien found themselves ending the game on a 12-2 run, with a final score of 8-15.

This was the final match of the season and was the deciding factor for the top spot in the FCIAC tournament. Van Riper said, “We just weren’t able to put it away when we had the chance.”
Staples will definitely look to learn from the experience, and will use this as fuel for the rest of their season. Captain Brill said “ I’m really looking forward for FCIACs because our team has proven we have what it takes to be number one.”