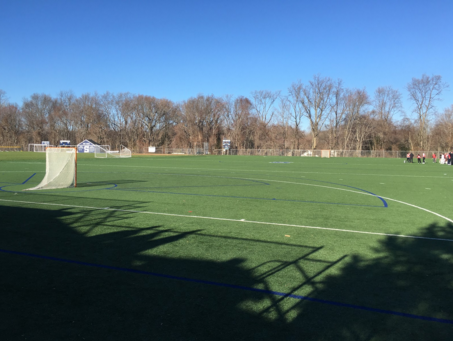 After only one practice, Staples Girls’ Varsity Lacrosse matched up against a highly successful New Canaan Rams team in a 8-7 loss on Thursday, March 29.

Though the team started off with a strong lead of 2-0, they were unable to hold on as the 2015 State Champion runner-ups took the lead and stuck with it till the end.

“As a team I think we played really well today… we didn’t let up.” Christine Taylor ’16, number 20 for Staples Lacrosse, said. This is Taylor’s second year with the team and she lead Staples with four goals on the day.

Though the team did not win, they still showed promise for a strong season to come. “I kind of feel like the possibilities [for this season] are endless; it’s however hard the girls want to work and how much they want to dedicate,” Coach Steph Calabrese said.

Many students, parents and fans looked on and cheered for their respective teams in the close match. “I think they might be rusty to start of the season, but, they have a strong team and chemistry overall so I think they will do well,” Gabriela Vega ’18 said.

With the new season, the team had to say goodbye to some of its talented seniors. “We lost a lot of seniors last year who were key players of our team,” Taylor said,“I think all of us stepping up will be key this year.”

Calabrese and the girls’ have their calendars marked for games later this season including; Ridgefield, Wilton and Fairfield Ludlowe. “Honestly though, on any given day in the FCIAC it’s whoever shows up,” Calabrese said.

The team looks to come back home with a win on Saturday, April 2 in their play day at Greenwich Academy.