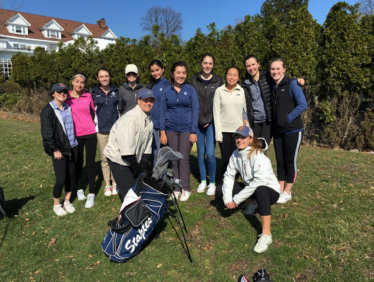 While the end of winter brings flowers and a rise in temperature, it also brings the start of spring sports. Girls’ golf is swinging into the new season, preparing themselves for the competition that awaits them in the following weeks.

Though the competition season has not officially started, the team had their  first practice last week on Tuesday, March 22.The golfers, who are seniors, juniors, and freshman, share their enthusiasm for the season ahead. “I am looking forward to all of the big matches like FCIACs and states. We were 4th in the state and runner-ups at FCIACs,” Anelise Browne ’16 varsity captain said.

Morgan Whelan ’16, JV captain, plans to become friendly with the new golfers on the team. “I’m really looking forward to all the new people, we have three, and getting to know them,” she said. “I’m also excited to just be back out on the course and playing again.”

New member of the team, Lily Kalman ’18, is also anticipating this upcoming season as a first year on the team. “I’m really excited for the season coming in as a new player and getting to know the game a lot better. I’m also really excited to experience being on a Staples team since I haven’t really been involved with sports at staples,” she said.

The team has high expectations for performance this year. “Last year, we won the JV championship so it’d be awesome if we won that again,” Whelan said.

Many members of the team also have high goals for themselves as an individual player. “My goals are to win fciacs and states and personally come top 3 in both FCIACS and states too,” Browne said.

Erika MacDonald ’17, also has high personal goals. “My personal goals are to make sure my short game is better and hopefully to shoot in the low 40’s,” she said.

Overall, it appears as though the team is having a promising beginning. “We’re starting off great, we have our first varsity and JV matches the week before break and I think we’ll be ready,” Whelan said.

Mcmahon also hopes that this season is going to be good one. “As a team, I hope we can all have fun,” she said.