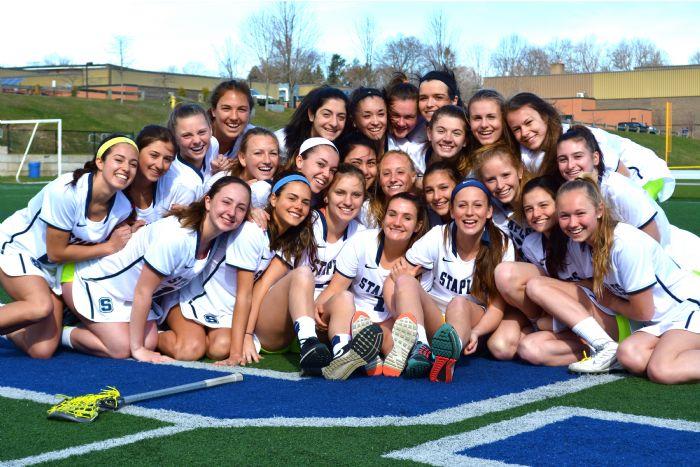 The Staples girls’ lacrosse team has yet to be named; however, the girls’ are already working hard to make this season memorable.

“Everyone’s been training harder than ever in the off season. We’ve all been doing body blast with G, workouts with coach Taylor, using a trainer in Darien, as well as participating in Sono clinics,” Colleen Bannon ’17 said.

Last year the team went 12-5 during the regular season. The team then went on to qualify for both FCIACS and States. They lost to Wilton 12-10 in the FCIAC quarterfinals, and they lost again in the State quarterfinals to Darien 19-6.

The team last year consisted of nine seniors who helped the team achieve their winning season. The team is aware of the loss of the seniors though.

“We hope to really mesh well as a team, we lost a lot of seniors, so I think that lots of people will have to step up and work together in order to make up for that,” Alexa Moro ’18 said.

Fortunately, the team is composed of many other girls who have experience playing. “We have a really strong sophomore class, along with compliments of strong juniors and seniors, that will really help lead the team. Especially with the help of sophomore goalie Alexa Moro who will give us a clear advantage,” Bannon ’17 replied.

After losing heartbreak games to several big teams, the returning girls are looking for redemption this year. “I would say that a big goal for us this year would be to get far into the FCIAC and State tournaments and win a bunch of big games like Wilton and Ludlowe,” Moro ’18 said.

With many college commits on the team, including Meghan Johnson ’18  (University of Delaware), Abby Najarian ’18 (Lafayette) and Alexa Moro ’18 (Villanova), a successful season seems to be approaching.

The girls have been working hard at preseason and have tryouts this upcoming week. Once the team is finalized they will have a Spring full of games.

Their first game is in Norwalk on Tuesday, April 5th at 6:00pm.