Homecoming: Playing in the Game, Cheering in the Bleachers 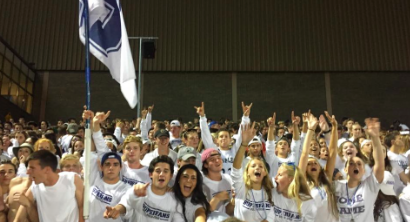 Nothing is more exhilarating than the Staples Superfan section. The energy and excitement is purely electric. Everyone is so hyped up, all dressed in white, it’s really an experience to cherish for the rest of your life.

Three years ago, my freshman year, I had the pleasure of attending the homecoming football game with some of my close friends and a large portion of the student body. It was a great time; definitely some of the most fun I had during school that year.

However, at that game, I thought a lot of what it would be like to one of the football players. I remember watching guys like James Frusciante ’12 and Lance Lonergan ’12 come down the stairs and take the field with “Thunder Struck,” by ACDC blasting and super fans cheering ecstatically. Right then and there, in a state of strong envy, I turned to my buddy to the right and said to him, “How cool would it be, if that was us?”

At the time (freshman year), I was only playing basketball and just recently stopped playing football. To this day, I still remember that game as the moment where I knew I wanted to play football again. Beyond just really liking the sport and wanting to have fun, the opportunity to play and showcase what I’m made of in big games like homecoming made the decision easy. I played football immediately the following year at school and have played ever since.

Being in the crowd has a unique incredibleness to itself, but I would rather be on the field any given day of the week. I’m not saying this because I would prefer to be a football player at Staples then to not be, I say it because there’s nothing like being on the field with a crowd like that. Anyone can always go to event with significance, but how many times can you be in that event with all the people cheering for something you’re apart of? It’s a surreal feeling, the passion, emotions, and intensity that can’t be matched anywhere else.

Dan Cozzi ‘16, former football player, current avid super fan, says, “The home games with my friends are experiences I’ll remember for the rest of my life, but nothing compares to the rush you get when you run out on the field to play an important high school football game.”

Whether on the field or in the superfan section, Staples Homecoming Football games are a wonderful tradition and experience.