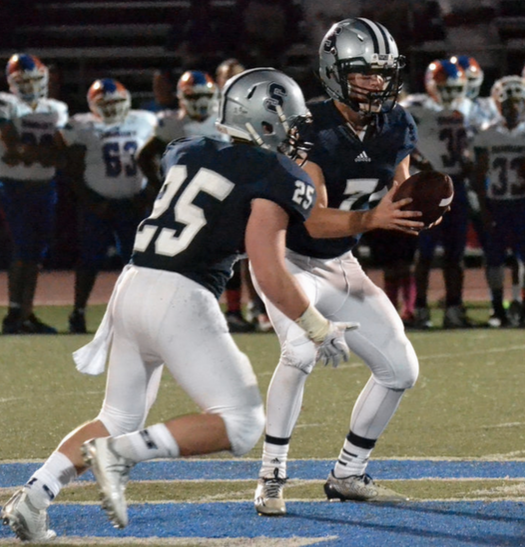 The Staples Wreckers football team opened its season Friday night at home with a 21-14 win over the Danbury Hatters.

Andrew Speed ’17 got his first start at quarterback,becoming the first non-senior quarterback for Staples in three years. “It was really exciting to get out on the field with the guys,” Speed said. “We have put a lot of work in during the offseason and it was a good feeling to finally get out there and play.”

Speed was nine of 14 passing for 113 yards and two touchdowns. “I thought Andrew had a great game,” team captain Ben Thaw ’16 said. “He threw and ran really well and had great control of the offense.”

Speed has been preparing for his first start since the Wreckers’ last game in 2014. “He’s worked really hard in the offseason and I think it showed in our first game,” left tackle Nick Roehm ’17 said. “He capitalized with some good throws, a few great runs and no interceptions.”

Even with the hype of Speed’s first start, running back Ethan Burger ’17 was able to steal the show with 204 rushing yards. “That’s fantastic for a first game and we can’t wait for the offense to improve and wreak havoc against opposing defenses,” Roehm said.

The offensive line was able to help Burger reach his 200 yard mark. “The offensive line completely dominated the game which opened those holes up for Ethan,” Thaw said. “Overall, I thought they did a great job.”

Roehm and the rest of the line are confident in their ability to help Burger and Speed. “We think that if the o-line can give Ethan room to run, that he can have a really big year,” Roehm said. “It’s up to us on the o-line to give Andrew time and it’s a real privilege for me to block for him as a part of this o-line.”

The Wreckers came out strong early, gaining a 14-0 lead in the first quarter, with Speed throwing touchdowns to Ryan Fitton ’17 and Colin Hoy ’16. The Wreckers held that lead until the third quarter when Danbury scored two touchdowns of their own, including a 58 yard catch and run by Hatters’ star receiver Massiah Crandell.

Speed then drove the Wreckers down the field and scored the game winning touchdown on a one yard run.

“I thought the team got the job done,” Speed said. “But we still have a lot of little things to clean up and improve on.”

The Wreckers next game is at Wilton on Friday at 7.