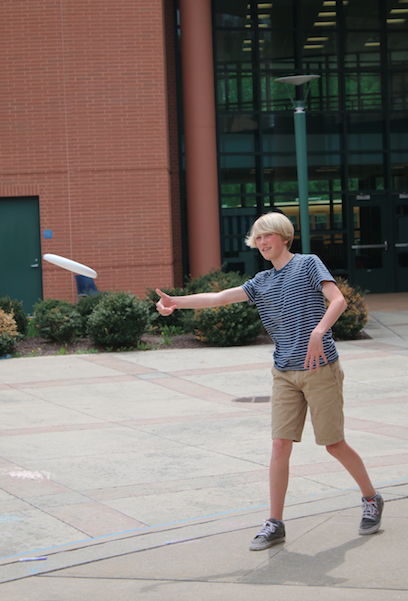 On a cold, windy afternoon in late April in the fieldhouse, a team unrecognizable to Staples is practicing. It’s not the basketball or soccer team but instead the new ultimate frisbee team.

While not officially a team, the ultimate frisbee squad is considered a club sport. Thomas Brown, a guidance counselor at Staples High School, is the faculty advisor to the squad. About four months ago, math teacher Alan Jolly was recognized as a Johnny Appleseed to the sport for his creation of the Staples team in the 1960s and subsequently inducted to the Ultimate hall of fame. Brown then had the idea to utilize the publicity and recreate the team.

After years of popularity followed by severe downturn since the late 1960s, Brown hopes that Staples keeps the team.

“In my opinion, ultimate frisbee right now is similar to what lacrosse, was about 15 years ago, and like lacrosse, we hope it grows into every high school in America,” Brown said.

He referenced the easy access to equipment and the lack of contact and exposure to head injuries as reasons for the projected growth of ultimate.

The movement to ultimate frisbee is not just at Staples, however; it is present all across America. According to a report by American Ultimate in 2013, membership to their organization grew by 29% since 2012.

So far, Brown has seen a decent turnout from both male and female students. About 15 kids have expressed interest, and six students have become regulars at ultimate frisbee practices.

Ryan Peterson ’18, while only a freshman, is one of the most experienced players on the team. He started playing ultimate frisbee at Wakeman pickup games. However, this winter he picked up his game when he played at Chelsea Piers in a league with professionals.

As far as competition is concerned, according to Brown, there are 20 teams in Connecticut that have ultimate teams with several FCIAC schools involved, including both Fairfield and New Canaan schools.

While they won’t play other schools this year, the plan is to eventually face other ultimate teams from around Connecticut so they can truly grow.

For those hesitant to join, CJ Krulewitch ‘17 has found that the ultimate team can be both an athletic and social experience.

“Everyone on the team tries to be helpful and supportive to each other,” Krulewitch ‘17 said. “It’s a really fun way to be active and meet new people.”

For the future everyone involved with ultimate frisbee has really high hopes and expects ultimate to be the next big thing both at Staples and around the country.

“I love that Staples has brought back the sport. Ultimate has been at Staples for over 40 years, and it’s an honor to be a part of the legacy,” Peterson said. Although I won’t be here, I hope to see ultimate become a varsity sport.”