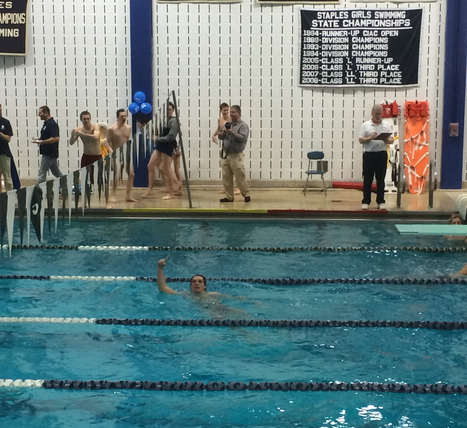 North Woods’ ’15 senior day won’t be easily forgotten, especially now that it will be engraved on the record board. On Friday, February 13, Woods broke the 29 year old 100 meter breaststroke record by just one hundredth of a second.

As the meet against New Canaan was the Wreckers’ last home meet of the season, it was Woods’ last chance to break the record that he had set his sights on all season.

“When I missed it by .14 in our second to last home meet, I knew I had to buckle down if I wanted to break it,” Woods said. “That meet put some doubt in my mind, but I knew I had to silence that doubt if I was going to set the record.”

Woods, who signed an NLI to swim at Loyola next year, trains with Staples in the winter as well as the Westport Water Rats year round.

The goal of breaking the record had been taunting Woods all season and is a clear result of his hard work.

“North has a phenomenal work ethic,” Coach Frisk Driscoll said. “Regardless of how he is feeling on any given day, you know he is going to put everything he has into the pool.”

After being unable to hold his speed the week before when he just missed the record, Woods focused on staying strong throughout the second half of the race while still taking the first 50 meters out fast.

“All the pain and fatigue of the race just disappeared,” Woods said referring to when he saw his time. “I saw my family and teammates all watching and it made all the training I’ve done worth it.”

The Staples team is in the midst of their championship season, with their next meet being LL Trials on March 14.