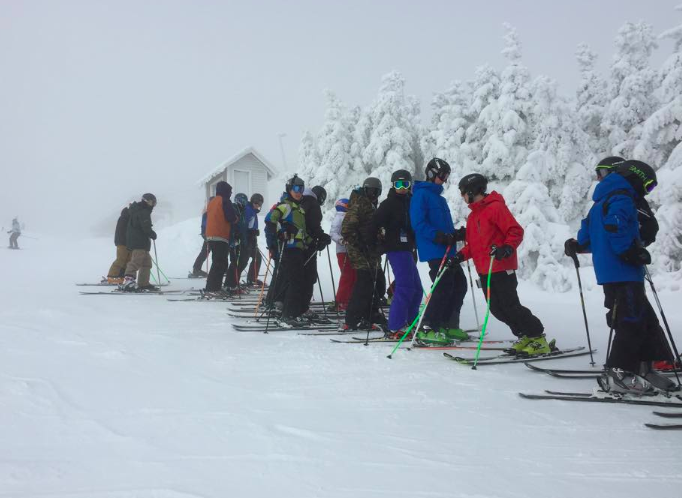 There is only one sports team at Staples where every practice takes place on a mountain: the ski team. The Staples ski team, composed of both boys and girls, travels to Southington Mountain in Plantsville, Connecticut once a week where they train for competitive races.

There they compete against other school teams such as New Canaan, Greenwich and Wilton along with schools outside of Fairfield County, like Farmington, Glastonbury and Southington, that also compete in the Connecticut Interscholastic Ski League. They start practicing in late December and compete all the way through the State Championship which takes place in March.

Arianna Brekke ’17 is entering her second season as a member of the ski team. Brekke has been skiing for 12 years, but last year was her first time skiing competitively. “The team is a lot of fun. It was a great way to meet other people who also love to ski and I can’t wait until this year,” Brekke said.

The schedule is very strenuous for these students given that, without traffic, the mountain is close to an hour away from Westport. The students get home late at night especially when they participated in a team trip to Okemo Mountain Resort located in Ludlow, Vermont on Dec. 13.
Despite the commute, many members of the ski team still have a lot of fun competing and hanging out with other members of the team.

Rory Steele ’17 has been competing for the Mount Snow Race Team for over seven years. “I had a great time competing last year,” Steele said. “The team exposed me to a bunch of great people and created so many great memories that I will remember forever.”

The team earns points, depending on how fast each student completes the course. The team that earns the most amount of points wins the competition.
“I am really excited for the start of this upcoming season, it will be great to be back on the snow. There is nothing like it.” Steele said.

Steele and the other members of the boys’ ski team had a very successful season last year. The boys team won the Class L title but fell short in the State Opens where they finished second to Greenwich. Brekke and the girls’ team also had a successful season, placing second in the state to Fairfield co-op.

The boys’ coach, Courtney Ruggiero who has been coaching at Staples for the last four years, was very pleased with their performance last year.

“I thought we had a great season. Staples has the largest ski team in the state,” Ruggiero said, “and last year we were first in the state for large schools.”