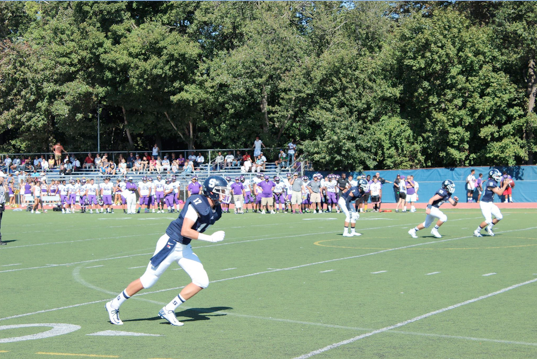 At 6’5”, it’s pretty hard to miss Ryan Fitton ’17 rising above stray heads in the hallway. However, he’s more than just an imposing presence. He alone holds bragging rights for one impressive title.

Fitton is the starting punter for the Staples Wreckers varsity football team, a job he earned freshman year and has continued into his sophomore season.

“I never really thought I would be [a good enough punter] to start on varsity, but I guess I didn’t do too bad of a job when they tried me out,” Fitton said.

Though modest, Fitton has the skills and “absolutely deserves” his starting spot, according to teammate Nick Roehm ’17. Roehm and Fitton have played together since eighth grade, and both represented Connecticut at the Football University program in Ohio.

“He’s passionate about the game, competitive, and his [own] harshest critic” Roehm said.

Coach Marce Petroccio also praised Fitton’s “tremendous poise,” pointing out his ability to perform under pressure as a freshman on varsity.

But Fitton not only performed under pressure, he thrived under it. In a game against Norwalk High last season, Fitton launched a 58 yard punt. To put that into perspective, through all of the 2013 NFL season, the highest average punt yardage was 48.9 yards. 10 yards shy of Fitton’s.

Fitton is not only a punter, but also a rising offensive player. Filling in for injured captain Jake Melnick ’15, Fitton had four catches for 60 yards in the first two games of the Wreckers’ season, making him the team’s leading receiver through the first two games.

Though spending the first two games as a wide receiver, Fitton normally plays split-end or tight-end.

Looking toward the future, Fitton has nothing but good things in store, according to Petroccio.

“He’ll grow into a starting tight-end for us,” Petroccio said. “And if he continues to work hard, he’ll have the opportunity to be a scholarship athlete.”