Hannah DeBalsi races to sports person of the year 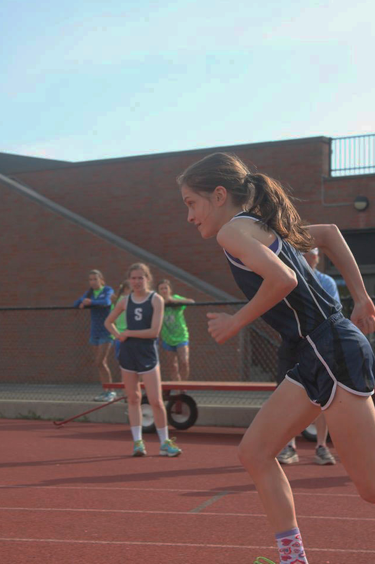 Hannah DeBalsi ’16, Staples varsity runner and national two-mile champion, came home from her Nike Elite camp this summer to a phone call from the Fairfield County Sports Commission. She was happily crowned Westport’s “Sports Person of the Year.”

Amanda Morgan, Debalsi’s cross country coach for the past three years, was excited to hear that DeBalsi recieved this honor.

“She is extremely deserving, both because she’s obviously talented and really successful, but I don’t think there’s anyone on the team that works harder than she does,” Morgan said.

Every August, for the past ten years, 15 students from Fairfield County have been selected to receive this award as a recognition of their tremendous impact on their team.

According to Laddie Lawrence, the longtime head of the boys’ cross country team, DeBalsi is the first Staples runner ever to receive the award.

He did mention, though, that two years ago, the Staples indoor/outdoor track team won the award as a unit; this is an exception that the Fairfield County Sports Commission is known to make when they believe a whole team deserves recognition rather than an individual athlete.

As a leader of her team, DeBalsi has been known to encourage her teammates to strive to do their best.

“Success breeds success,” girls’ cross country captain, Erica Hefneway ’15 said, in regards to DeBalsi’s outstanding performance. “Once someone on the team succeeds, everyone is anxious to do well.”

Despite the fact that cross country season is in full swing, DeBalsi is not currently racing. She said she and her coaches made the decision for her to not run in the typical cross country meets this year so she could save her strength for FCIACs, the more competitive part of the season.

Lawrence said he is excited to watch DeBalsi keep pushing herself when she does start racing again.

“To be as good as she is so soon is really a fantastic thing. She’s very dedicated, very determined, she’s a sweet kid, put her on the track and she’s a killer,” Lawrence said.

DeBalsi will be attending the Sports Night awards dinner on October 20 to receive yet another award to add to her collection of many displayed in her bedroom.