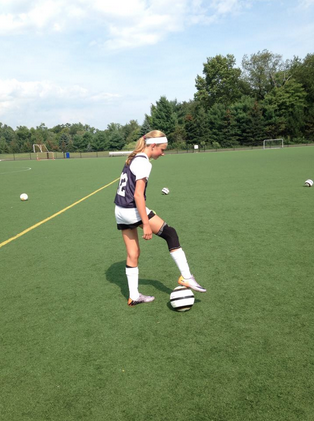 Olivia Ronca '18 during her soccer practice

High school is a big change from the middle school, whether its the academics or the social aspect. However, there is one thing that many students have a hard time adjusting to, no matter how prepared one thinks he or she is.

The sports at Staples High School are extremely competitive and well known. Having sports like soccer, whose boys varsity team was fourth in the FCIAC, to an all FCIAC girls track team, the sports here at Staples are definitely something to take pride in.

The freshmen have an opportunity to try out and make either the freshmen, JV, or varsity sports team. Hallie Spear ‘18, a field hockey player, described her tryouts as “extremely difficult” and “hard to see who would make the team and who wouldn’t.” She knew it was going to be challenging coming into the tryout, however the middle school and high school teams had “major differences” Spear said.

Through hard work and dedication, Spear made the freshman team, however others weren’t as lucky. “42 freshmen tried out, and 20 girls were cut. A few that were on the A team last year. Also a few sophomores and some juniors, even some who played off season,” said Spear.

When asked what the differences between the middle and high school sports teams were, Spear responded, “I think high school sports are harder and more intense, especially Staples, compared to P.A.L. But the challenge is worth it, I love field hockey, it’s tons and tons of fun!” she says enthusiastically.

Olivia Ronca ‘18, a soccer player, also felt the same way with her soccer tryouts. “There were many good players that I had to compete with.” Ronca also felt that there was an obvious difference between her old soccer team and the Staples one, “There is a big change except for the game stays the same. It is directly after school, games during the week, etc.”

Fortunately, Ronca makes not only the soccer team, but is now part of the JV squad. For her tryouts, there were no cuts, but two freshmen girls were moved all the way up to varsity.

This just goes the show the level of intensity for some of these freshman athletes, and how extreme most sports are becoming. The difference between the middle and high school sports are growing, having the competitiveness rise as well as the strength of the young athletes.