For Tyler Scanlin, dedication pays off 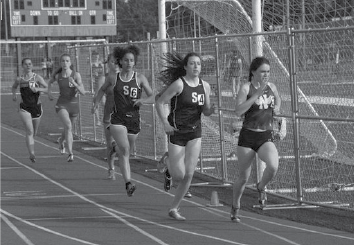 During the 800 meter race at Danbury High School, Tyler Scanlin ’14, second from right, sprinted at blazing speeds and finished in 2nd place. Scanlin broke the school record for this event with a time of 2:13.

While Tyler Scanlin has always appreciated the invincible feeling of propelling herself around the deep blue rubber track, she truly fell in love with running and the endless possibilities it presented at the New England’s championships in 2014. Scanlin beat her personal record in the 600-meter indoor event. This success only made her more determined to excel.

This drive and commitment to track has not only made Scanlin a two season captain for track, but it has also won her the honor of being the Female Athlete of the Year.

Driven, encouraging and enthusiastic are amongst the many positive qualities teammates and coaches used to sum up what makes Scanlin such a gifted athlete.

“Tyler Scanlin is really the core of our team,” teammate Olivia Wiener ’15 said. “She’s a tremendous athlete, but that doesn’t even sum it up.”

Underclassmen Brynly Marsh ’16 commented on Scanlin’s ability to inspire everyone around her. “She’s always there to push you, even during our hardest workouts,” Marsh ’16 said. “She’s very driven.”

Scanlin was the captain for both the indoor and outdoor track team this year. A three-year soccer player, Scanlin decided to focus on track her senior year and do cross-country in the fall. Scanlin retired her worn-out soccer cleats and made a full commitment to running track.

This decision was fueled by her intent to be a collegiate athlete. Throughout her junior year ,Scanlin was intrigued by the crisp white recruitment letters with her name printed on the front.

Determined to get recruited to the best possible academic school, Scanlin strived to be a standout track-athlete and student. With this determination, Scanlin has broken numerous school records, which include the outdoor 800-meter record, and the indoor 600-meter record, 4×400, 4×200, 4×240, the spring medley relay (SMR), and distance medley relay (DMR). Her school honors include being a scholar athlete and the recipient of the Block S Award.

In only this year, Scanlin was awarded the honor of All-FCIAC, All-State, All-New England, and All-American.

“Whenever [Scanlin] gets back a personal record, she can’t wait for the next week, so she can beat it,” Marsh said.

Scanlin trains six days a week and, needless to say, her hard work paid off. Scanlin committed to attend Lehigh University this fall where she will continue to run track.

“When you watch her run, you know she’s giving it everything she’s got. It’s truly inspiring to watch, and not just for the underclassmen. She inspires everyone on the team,” Wiener said.