Ben Cion has a passion for football (the European kind) 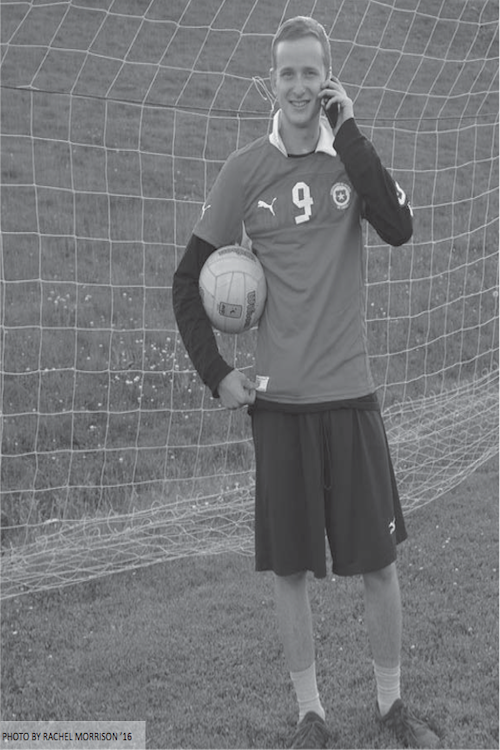 Ben Cion ’14 poses on Loeffler Field while combining his love for soccer and social media. His twitter @StaplesSoccer1 has 160 followers waiting in anticipation to hear his game commentry and recap.

Being cut from a beloved sport can be a traumatic experience. However, this was not case for Ben Cion ‘14. When he was cut from the soccer team his sophomore year, he could’ve given up on the game. Instead, his passion for the game has only increased.

Two years after being cut the Staples Soccer team, Cion is more involved with the game than ever before. He not only referees for children’s teams and plays in rec leagues across the town, but he also became the live tweeter for the varsity team this past fall.

Head Coach Dan Woog approached Cion before the season and asked if he wanted a job highlighting key parts of each game on the team’s Twitter page. Cion agreed and joined the team as its first ever live tweeter. He attended almost all of the games, and while he described it as “stressful” at some points, he enjoyed his experience as he got to watch the game he enjoyed the most.

@StaplesSoccer1 Pravder just scored maybe the best goal I’ve ever seen. It was incredible. Left footed half volley into the top corner

Like most soccer fans, Cion loves watching the Barclays Premier League and in particular his favorite team, Liverpool FC. Based in Merseyside, England, with a rich history and remarkable fans, the team is so exciting that Cion makes it a point to rarely miss a game.

The most memorable moment of this campaign occurred in a game in April. “It pains me as a Liverpool fan to say this,” Cion says now. In a hard-fought, defensive, 0-0 match, the Liverpool captain made a small but ultimately fatal move that opened the door for Chelsea through its Senegalese striker. “Steven Gerrard slipping, allowing Demba ba to put Chelsea 1-0 up and ultimately take the title from Liverpool’s hands. It was heartbreaking.”

@bencion33 I really like Valon Berisha as a signing, He’s young talented cheap and a cm. Good business. #LFC

It’s scenes like these that Cion loves. Sports fans should give English soccer a shot, he said. “It’s not just the sport; it’s the culture — the way people kind of argue,” Cion reflected. It becomes such a passion that it’s hard to distinguish the club from the fans — fans are so excited, and the players feed off of it. “When referring to Liverpool, I say we,” Cion explained.

However, being in America and loving an English football team comes at a price. Because of the time difference, Cion often wakes up as early as 7:30 AM on Saturdays to watch his favorite team play. In the end, though, Cion finds the sacrfice to be worth it.

@Staplessoccer1 As a freshman I dreamed of winning the state title as a member of staples soccer. I now proudly say goodbye as the live tweeter. To everyone who supported the team this season and followed this account. A program is nothing without the fans.