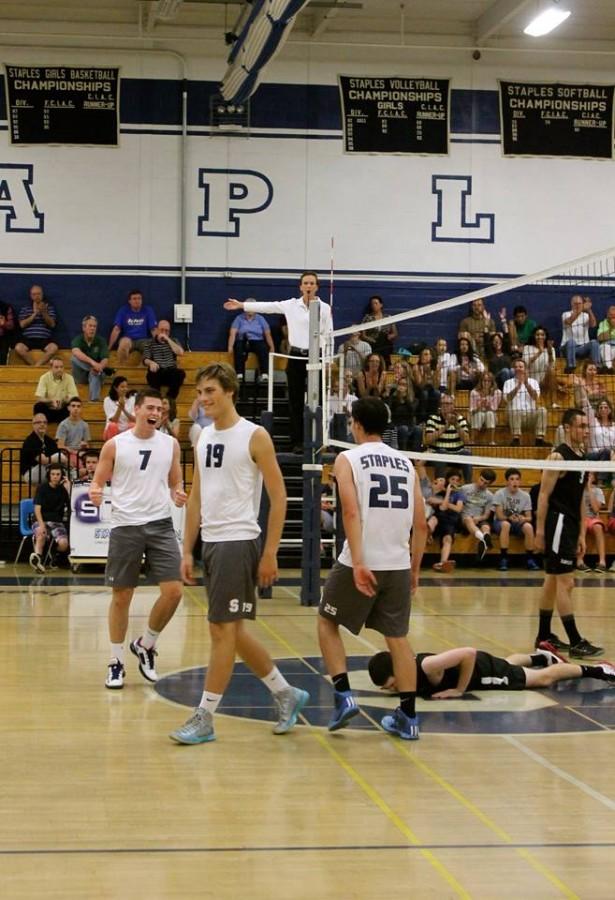 Coming in as the two-seed in the Class LL State tournament, the Staples boys’ volleyball team was hoping to advance towards the semifinals of the tournament  as they took on the Xavier Falcons, the seven-seed, in a scintillating quarterfinal matchup.

Before the match the team knew very little about their opponents from Middletown, CT.

We knew very little about their team, but we came out with mindset that we had to work as hard as ever,” said Jonas Piekara ‘16.

Coach John Shepro talked about how the team started out slowly in the first game, but the serves of co-captain  Lucas Grevers ‘14 really helped the team out. He added that he thought that the play really picked up as the match progressed.

In the first game, Staples struggled falling behind 19-16 to Xavier. However a comeback kickstarted by Grevers’ back to back aces allowed for the Wreckers to win the first set 25-22.

In the second set, the Wreckers got off to a slow start again but this time it was the serving of Andrew Marriott ‘14 that helped Staples take a 15-13 lead. Xavier tried to mount a comeback, but in the end Staples won the second set, 25-20.

In the last set, Staples came out from the get go and dominated, winning the final set 25-14 with senior George Ingber ‘14 getting the game winning kill.

Staples now takes on the winner of the match between Southington and Shelton on either Monday, June 9.