It’s fun no ‘mudder’ what 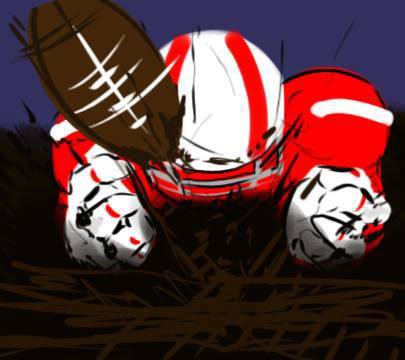 For many people, rainy or snowy days are reserved for the occasional trip to the movies, tedious errands, or  staying in bed and reading a cozy book. This is not the case for most Staples athletes. Instead, some find themselves out on the field fighting for Homecoming or even for their season. In these cases, students find themselves not only battling their opponents but also fighting the elements.

While this may seem like a hinderance to many, most athletes at Staples embrace the challenge knowing that the game may be one that they would remember forever.

The most memorable of these games happened in 2011, when the Wreckers football team took on Darien in a Homecoming game that nobody would forget. In a game that turned in an instant-classic, the Wreckers fell behind early to the Blue Wave in the midst of a blizzard. However, due to a sensational running game, the Wreckers were able to complete a comeback as they won by nineteen points.

“We won that game because we had mentally tough kids. We knew that we couldn’t let it affect the way that we played,” head coach Marce Petroccio said.

While players must have the mentality to not let the weather affect them, it does take a lot more concentration to do simple actions. Jackson Ward ’16, the center on the Wreckers’ football team, acknowledges that the elements do make some things more difficult to do.

“The bad weather conditions affect me quite a bit because I have to snap the ball, and when my hands are cold or the ball is wet it makes it much more difficult to get the snap where I want it,” Ward said.

In a sport like rugby, however, playing in the rain or mud changes the way the game is played.

“Rugby changes because the ground is a lot softer and tackling or getting tackled doesn’t hurt as much,” Rugby coach Joseph Barahona said.

Barahona also added that, “it looks pretty cool when the blood mixes with the mud.”

More recently, the boys’ varsity soccer team took on Newtown in the CIAC second round match at Blue and Gold stadium in Newtown. On a cold, windy, and rainy night, the Wreckers were able to prevail against the number seven team in the Class LL tournament.

“The weather made the game so much more intense. None of us wanted to lose in the rain, and the conditions definitely made the turf a lot slicker and faster,” 2014 soccer tri-captain Michael Reid ’14 said.

No matter if it’s rain, snow, wind or hail, there are always potential memories that will last a lifetime when a game is played in poor weather.

“I’ve always wanted to play a big game in the snow after I watched my brother play in one in 2011” Ward said.