Fieldhouse is Not So Much of a Home 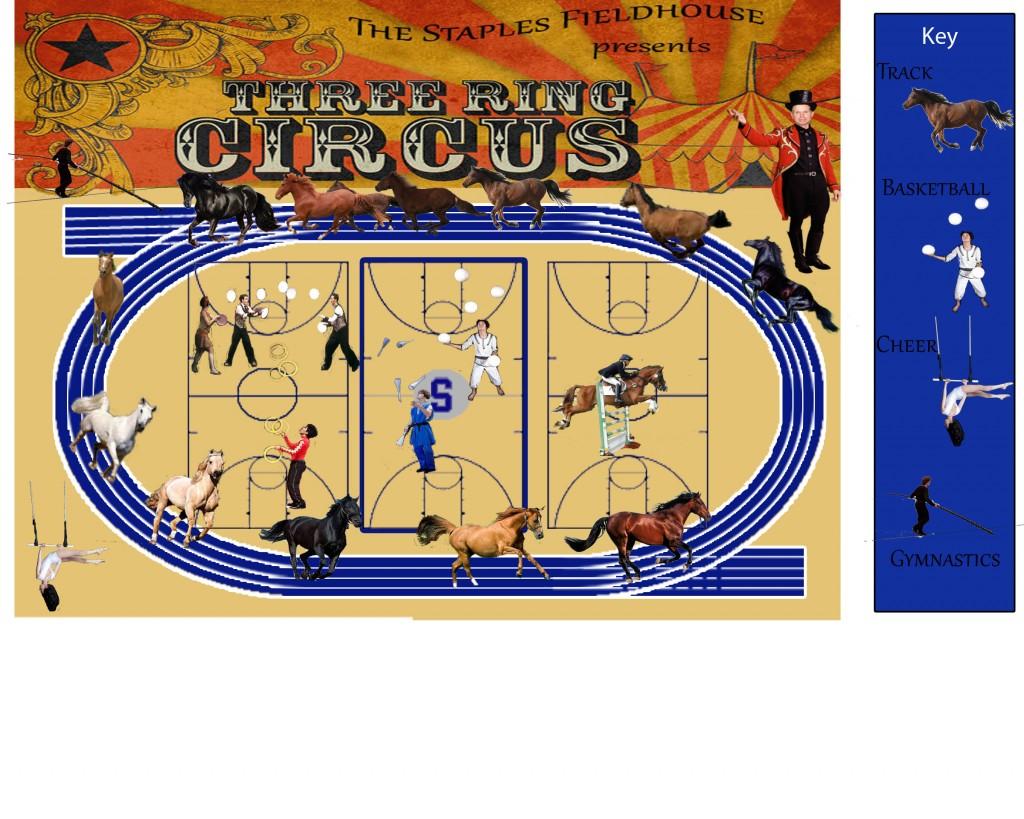 The cacophony of basketballs pounding the court, feet thumping against the track, and cheers echoing in the 65-foot tall fieldhouse harmonizes with the whoosh of hurtling gymnasts and the grunts of wrestlers.

On any given winter afternoon, the Lou Nistico fieldhouse hosts up to five teams, about 300 athletes.

It falls on Track Coach Laddie Lawrence to fit everyone into this limited space, changing practice times and locations to match the demands of each team.

Lawrence says that all of this only works if the distance runners get outdoors; so a fair number of runners are outside most of the winter, despite freezing temperatures.

Erica Hefnawy ’15, a distance runner, said she doesn’t mind running outside, except for the time it started to snow in the middle of a workout last year.

“I was borderline crying,” she said.

Malcolm Watson, the boys distance coach, says the team risks snow and ice because being inside means being on constant alert for potential collisions with other runners.

Olivia Wiener ’15, a sprinter, also talked about colliding with athletes from other teams.

“[It’s] less so the amount of runners, and more so that lacrosse, cheerleaders, basketball think its okay to just walk across the track,” she said.

There have been some unfortunate accidents. Laddie Lawrence recounted the time his son, Andrew Lawrence ’04, crashed into a cheerleader who wasn’t paying attention while standing on the track.

“She went fifteen feet,” Laddie said. She came out uninjured, but other cheerleaders have faced other problems from the lack of space.

During the winter, the cheer team cannot practice basketball game routines like, “Through the Hoop”, “Jump Ball” and “SHS.”  The field house does not offer enough space for the seven necessary mats.  Instead, the team is sometimes forced to practice tumbling in the cafeteria.

“The low ceilings freak some of us out when we are flipping around,” cheer captain Emma Mikesh ’14 said.  “Last year I freaked out and landed on my head, which caused me to get a concussion and a really painful back injury.”

She does realize the difficulty of housing the many winter sports teams.  “It’s just sometimes unbelievable that JV sports get priority over us. It just shows that we are not considered anything close to a sport,” Mikesh said.

Lawrence said all teams have to make sacrifices; while cheerleaders sometimes have to adjust their training to match available space, the same is true for track.

“When [cheer] comes in to the field house, [indoor track] can’t practice and do some of the things we would normally do,” Lawrence pointed out.

Cheer has managed by moving to the cafeteria, but gymnastics has decided to almost completely vacate the building. The team practices just once a week at Staples because there is only enough space for one beam and one vault.  Instead, they hold a majority of their practices at the roomier Westport Weston Family Y.

Despite the team’s lack of space, Andrea Mahieu ’15 does not think that one team has priority over another.  “Everyone only uses the space that they need,”  Mahieu said.  “The track team needs the track; the basketball team needs the basketball courts.  I just don’t think there is enough room for all the teams to fit into one space.”

Something important to keep in mind: many schools don’t have nearly the space provided by the Staples fieldhouse has a total of 3,600 square yards of floor space.

Athletic director Marty Lisevick says that while this area is “packed,” as long as coaches plan ahead, things are manageable.

“Laddie does a great job,”  Lisevick said. “As long as I keep him in the loop it works out pretty well.”