Wreckers defeated by Falcons in last home game before playoffs 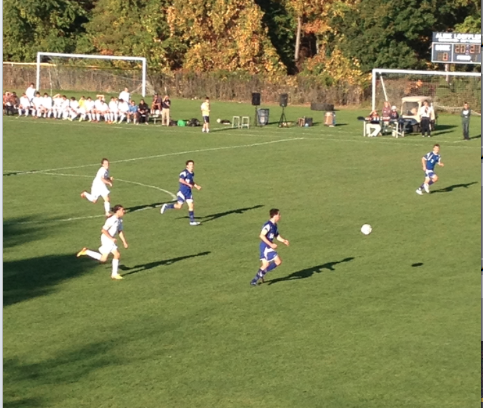 Staples and Ludlowe fight hard to keep their good records going into the playoffs.

On Oct. 21, 2013, the Staples boys’ Soccer team lost to Fairfield Ludlowe by a score of 2-1 in their last home game of the season before the FCIAC playoffs begin on Friday.

The Staples boys jogged onto the field yesterday afternoon with the intention to avenge last year’s loss to the Ludlowe Falcons and keep their momentum going into the playoffs and post season.

Last year’s game at Ludlowe was evenly matched at 0-0 until Fairfield’s Tobias Gimand ‘13 scored within the last 90 seconds of the game. This marked the first time that Fairfield Ludlowe had beaten Staples.

The beginning of yesterday’s game started off with little action. The closest either team came to a goal was with 12 minutes left in the first half. Fairfield almost scored off of a corner kick, but the ball was turned over to the Wreckers. With four minutes left in the first half, Staples scored the first goal, taking the lead. But with merely six seconds left before the first buzzer, Ludlowe got another chance off of a corner kick and this time Fairfield’s Richie Bellucci scored, ending the half with a score of 1-1.

A tied game caused all of the boys to push themselves harder in the second half. Both teams played tough throughout the remaining minutes, resulting in multiple fouls and yellow cards. With 22 minutes left of the game, the final goal was made by the Falcons leaving the score at 2-1. And although there were no more goals, both teams fought hard until the game was over.

But the Staples’ team is not satisfied with the defeat.

“We played poorly. We did not execute our game plan. We allowed Fairfield to dictate the pace,” Staples’ head coach Dan Woog said.

This game dropped the record of the Staples team to 10-3-2 and boosted Ludlowe to 11-3-1. Staples still has the chance to redeem themselves during their game today against Westhill and the FCIAC playoffs, which they have already qualified for.

“The key is to bounce back tomorrow and get a win to solidify a home game in the FCIAC tournament. We couldn’t get the job done today, but tomorrow’s another day to try to pull it off,” Captain Jack Scott ‘14 said after the game.