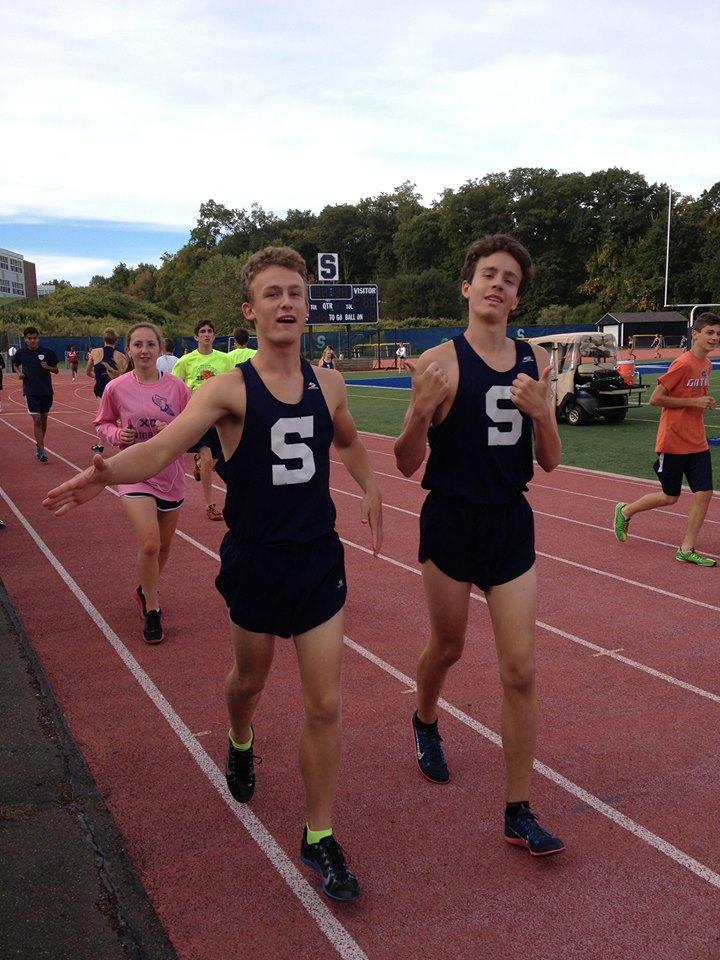 Varsity runers Oliver Hickson, '15, and Jack Berman '15 jog a few warm up laps before their race.

The teams faced off in novice and varsity races for both boys and girls.

Each race filled the air with a fury of the racer’s determined footsteps thumping under the crowd’s mingled cheers for different schools.

As a team, Staples placed first in all four events.

Zak Ahmad, ’17, who placed second in the novice race after Staples’ Joey Bairaktaris, ’16, said, “I think we did really well overall, especially in novice. We were the top fourteen places.”

Girls triumphed in both their novice race and 3k varsity race, with Hannah DeBalsi, ’16 placing first and Erica Hefnawy, ’15 closing in at third for varsity.

The boys varsity race—a 5k run including three laps around the Staples track and two around the Wakeman fields—also proved exciting for Staples.

“The race was great,” Hickson said. “ [We] didn’t really want to go our hardest because there’s an important invitational on Saturday, but the team still did very well overall.”

Conserving stamina for the approaching championship season seems to be the topic on everyone’s mind.

“We’re looking forward to it,” said Coach Laddie Lawrence. “It’s going to be interesting when weget our first taste [of championships]. We’re one of the 15-18 top rated teams.”

Hickson agrees with Lawrence that Staples is definitely one of the major contenders for FCIACs.

The first FCIAC championship meet will be next Thursday at WavenyPark in New Canaan.