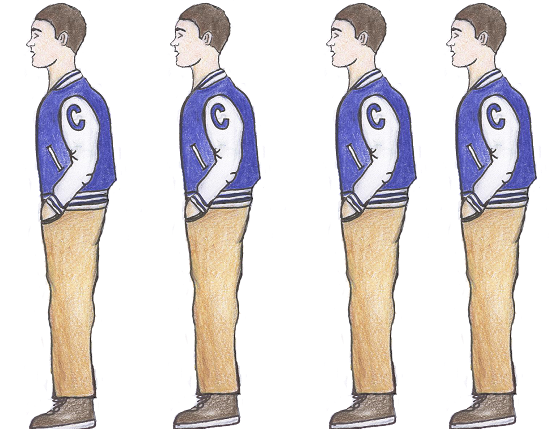 aptains are one of the key features of a team and its success. But recently, sports teams at Staples have seen a skyrocketing number of captains.

The baseball team consists of 26 players, five of whom are captains; the football team had six.

Marty Lisevick, Staples’ Athletic Director, said that captains should “be leaders of their respective programs and in the classroom, to be role models for Staples HS and our athletic program. We want them to be a sounding board for our coaches and players­—the liaison between the two.”

“We are there to be there for what the coaches don’t see and, be leaders for the younger girls,”  Nikki Bukovsky ’13 said. Bukovsky is a member of both the softball and girls’ basketball teams and feels that each team has the right number of captains.

Jim Goodrich, faculty advisor for the sailing team, feels captains play a vital role in the success of the teams at Staples.

“They aid in communication between members and the coaches. They should act as leaders,” Goodrich said.

With captains being the bridge between coaches and athletes, many people believe that a large number of captains works well for a team.

Henry Dumke ‘13,  a member of the sailing team and this year’s lone captain, feels that having more captains would mean he’d have help updating the team website and sending out emails.

However, the large number of captains has posed a problem for some teams in the past.

In 2010, the boy’s swim team had an issue with having too many captains.

With some teams, such as sailing, having only one captainand, others having many more, it begs the question, how are captains determined?

Nearly every team has the athletes vote for who they think should be captains, and those votes are then approved by the coaches. To help coaches decide how many captains to pick, the athletic department created a policy a few years back.

“If you have a team of 10 then you should have one or two captains; a team of 20, two or three captains; from there, you get into programs with 50-100 members, and the numbers can increase,” Lisevick said. This creates a loose guideline which leads to the increasing number of captains for some teams.

The bottom line is that it is hard to put a set limit on the number of captains a team should have.

It is a decision to be made based on player votes and the coach’s decision.

It is not something, on the other hand, that can be decided by a formula.