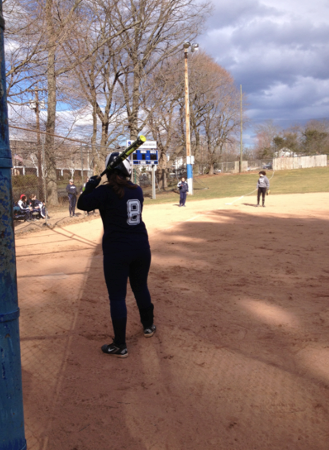 On March 26th, the Staples Softball team lost their second scrimmage against the Bethel Bobcats at home with a final score of 10-4.

Before the game started, some players expressed their concern.

“While watching the girls from the Bethel team warm up, I could tell that they were a lot harder than the competition we had earlier in the week,” Amy Miers ’13, a senior player, said.

However, since the game was a scrimmage, the team’s main goal was to test out different tactics in order to be prepared for the season starter next week.

“We threw different people into different positions throughout the game to experiment a little, since this was more of a practice game,” Sarah Mullen, the varsity coach this year, said.

Although the team didn’t manage to pull out a win on their home turf, the season is still looking bright for the Staples Wreckers.

“We have some fantastic seniors as well as returning and new players this year,” Mullen said.

Both the players and the coaches have high hopes for what they will be able to accomplish this season, and know exactly what they must do in order to achieve this.

“I think we need to mesh first as a team and then the higher level of play will follow,” Emma Moskovitz ’14 said.