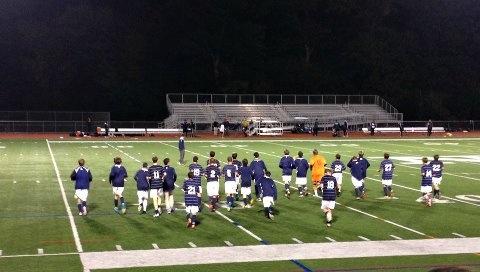 Anxiety built up in the stadium, as the crowd couldn’t determine who would go home with the win.

It was a challenging and unpredictable game at first between Norwalk and Staples. The teams were well matched, as they battled back and for forth for a win.

Last year, the teams played a close game that ended, ending with a tie. However, today the teams came back to face each other to officially end the tiebreaker.

Staple’s goalie James Hickok, a vocal and aggressive player, contributed a major role in keeping the score tied at 0-0 for most of the game.

Norwalk, who stands undefeated, did not score until the second part of the game. With thirteen minutes and twenty seven seconds left on the clock, number eleven in the midfield from Norwalk’s soccer, fooled the audience by almost kicking the ball in goal. He didn’t hesitate to score again, racing back to the ball and kicking it straight into the goal. It was a great pass through the back line that lead Norwalk to their first goal. Now breaking the tension of the crowd, with a score of 1-0.

The Norwalk audience leaped from their seats. As they sang “Olay”, a common cheer sung to support teams a during game. Soccer balls went flying in the air, each person in the audience throwing it to the next. Norwalk’s team gathered around their teammate and formed a group hug, congratulating their teammate.

Staples however, did not give up. They kept themselves in the game by stringing passes together. Their defense was tight and aggressive which helped shut down Norwalk’s offense.

With seven minutes and forty four seconds left on the clock, Nacho Navarro from Norwalk, volleyed the ball into the right corner of the goal, bringing Norwalk two points ahead of Staples.

Anticipation filled the stadium. With just seventeen seconds left on the clock, the game stopped. The countdown from the audience stopped, everyone paused.

Alejandro Rivera from Norwalk, ran into another Staple’s player, leaving Alejandro injured. Everyone slowly watched him walk off the field before the game continued.

Even with a close score, both teams played a tremendous game through their effort and determination they moved the ball up the field with incredible passes. Neither gave up, playing their heart out until the clock ran out.