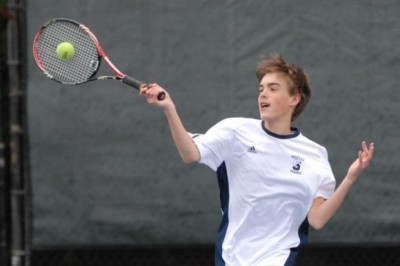 Luke Foreman '14 hits a forehand during a match. | Photo by staplesboystennis.com

On May 2, 2011, the Staples boys varsity tennis team defeated Norwalk High School during a home match. The final score was 7-0.

The scoreboard read as follows:

Danny Hirschberg ’11, captain of the tennis team, feels that his team did a great job, and really worked hard. “I thought the match went really well,” Hirschberg said. “It was our first match since our win against Greenwich that was on Friday, and we were all so happy that we were able to get a win and remain undefeated.”

The varsity team’s coach of two years, Kris Hrisovulos, was happy about the outcome of the game, and very enthusiastic about challenges to come.

“We are excited to be serious contenders for both the FCIAC and Class LL titles. Our goal is to get back to the FCIAC Championship and win the title, which we haven’t done since 2001.”

Hirschberg says he’s very hopeful for the rest of the season. “A big challenge coming up will be playing New Canaan. That will be one of our biggest matches of the season. Other than that, we are going to keep preparing for FCIACs.

Last season, the boys varsity tennis team finished up with a record of 18-1. They were also FCIAC runner-ups.

“This was a comfortable victory.  We did what we had to do against a team that has been struggling all year, which is be efficient, respectful and sportsmanlike,” Hrisovulos said.