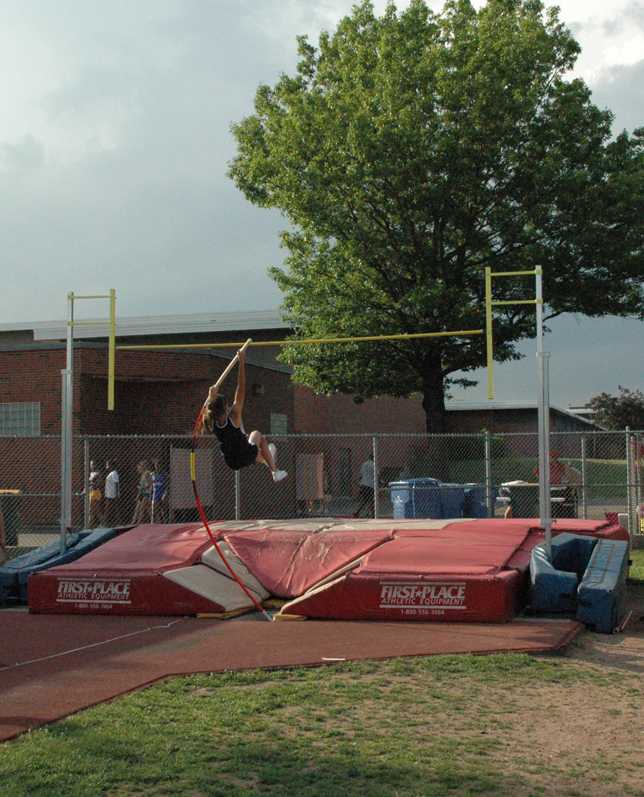 After meticulous training and explanation from pole vaulting coach Andrew Lawrence, McConnell took his first jump. He sprinted down the runway, planted the pole into the pit, reached his hands up, and inverted his body over the bar – all in one fluid motion.

“It’s definitely scary the first time you do it, you feel like you have no idea what you’re doing,” McConnell said.

However, after pole-vaulting for the past two indoor track seasons, McConnell’s fears are long gone, and the motions have become natural. The time and effort he has put into the track and field event has allowed him to reach his current personal record of 10 foot 6 inches.

“It’s exhilarating to get up that high and really feels great after clearing the bar,” McConnell said.

Other pole-vaulters have similar sentiments about their first attempt to clear the bar. Lexie Schachne ’12, who currently holds the Staples girls’ record for pole-vaulting with a height of 11 feet, still remembers the initial nerves that accompanied her first jump.

“At first its really scary. There’s nothing like running down the runway and trying to jump with a pole. After you overcome the fear though, it’s really fun,” Schachne said.

The poles the athletes use are about 13 to 14 feet long, and their cost can exceed 400 dollars. Therefore, proper training is crucial.

“There’s a lot of preparation [when you’re learning], you don’t want anything to go wrong,” Schachne said.

Even with proper training, injuries do happen. McConnell recalls one jump when he hit the bar and landed on top of it, with such force that it cracked. Yet luckily he escaped with only bruises.

Meghan Lipset ’11 had a similar experience where she landed on the bar. “It really hurts if you hit the bar. I’ve landed on my back before but you just have to get up and go again,” Lipset said.

In addition to learning the proper methods, pole-vaulters must also take part in the physical preparation, and must be in excellent physical shape. Athletes must train cardiovascular, and muscularly. To do so they lift weights, do wall plants to practice placement, and practice bending the pole.

Their ultimate goal in training is to master the full range of motion, which is virtually impossible according to John Demetres ‘11.

“To master the full range of motion you have to practice it over and over again until it becomes muscle memory which includes the plant, the leg swing, the hip thrust, the pull up, the barrel roll, the push, its tough stuff,” Demetres said. “Its quite the path if you wish to succeed.”

Another challenge pole-vaulters face is the weight class system. Athletes use poles, which are weighted differently according to their own body weight. Similar to wrestling, each athlete wants to weigh up the limit of their class, but not exceed the limit and be forced to compete in higher weight class where the poles are more difficult to bend.

The athletes are “constantly trying to gain weight” according to Demetres, so lighting weights daily is necessary.

However, Megan Lipset ’11 was accustomed to the physical rigor and training of pole-vaulting before was ever handed a pole, as she had been a competitive gymnast for six years before taking up pole-vaulting.

“A lot of pole-vaulters used to be gymnasts. The strength used for gymnastics helps a lot, you need all your muscles.”

Despite the rigors of the pole-vaulting, these athletes continue to pole-vault because of their love for the sport and the exhilarating feeling that comes with flying high in the air.

“I love flying and I love the team, and that’s why I do it,” Lipset said.