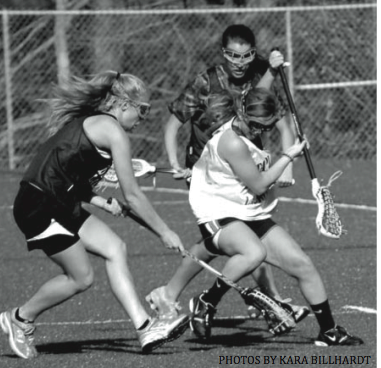 Friday, Apr. 9, Staples girls’ lacrosse opened their season with a 14-6 victory over the Trumbull High School.

Last year the 2009 girls’ varsity lacrosse team arduously beat Trumbull in overtime, this year it was evident that the Wreckers surpassed the ability of the Eagles.

“We have a strong bond and amazing chemistry on the field. It really showed in our game against Trumbull” said goalie Panagiota Tsilfides ‘11.

Head Coach Cathy Schager was extremely satisfied with her team’s first game of the season as well.

“The first half of the game was played exceptionally as we took an 8-0 lead over our opponents. Overall, our transition from the offensive players to defensive players was very sound. We have no weak links on our team” said Schager.

Aside from the success of the team as a whole Schager noted that Crofts and Captain Alex Koenig ’10 significantly stood out.

“Ali had a considerable amount of groundballs and positive turnovers, whereas Alexa was incredibly strong on defense” said Schager.

Despite the team’s winning performance, the first game has provided Schager with areas the team can further improve upon.

“The second half of the game was not as strong, however this gives us something to focus on for the future – consistency” said Schager.

The Wreckers’ well-earned win has driven the team to gain a positive attitude for the season to come.

“I have extremely high hopes for the team this year. We play great together as a team and have no weak spots anywhere on the field. Every game is going to be a challenge, but are going surprise every team we play,” said Ambrose.

The Wreckers are energized for the rest of the season and confident that they will continue their success.