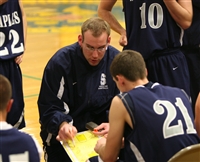 Staples Boys hoops captured a thrilling overtime victory Monday over Ridgefield to keep their FCIAC playoff hopes alive. The Wreckers, who must win out to have a shot at the post season, beat the Tigers 79-74 in dramatic fashion.

It was senior night for Staples’ only senior Brendan Rankowitz ’10. He had four points in the leading his squad to victory at home.

Rankowitz was aided by skilled junior guards Gabe Seidman ’11 and Luke Yeager ’11 who combined for 45 points in the game. The pair had to match a stellar performance from Ridgefield’s Doug Del Bene who nailed multiple three-pointers in the final minutes to tie the game. Staples had led in the fourth quarter by nine points when Del Bene went off for 12 points in the quarter.

Staples and Ridgefield went into the fourth quarter tied at 70 points apiece. The two teams went back and forth all night with the game experiencing many lead changes. Just as in the fourth quarter, the Wreckers held a comfortable lead with just minutes left to play in the first half. The Tigers though, showed their persistence with a 10-4 run to go up by one point at the end of the half. Staples showed renewed spirit out of the gate in the second half however, and reclaimed the lead with a 12-3 run to start the half.

With the win, Staples improved to 10-9 and gave themselves a legitimate chance at post-season FCIAC play. The road is not easy though with a must-win contest at Trinity Catholic on Wednesday. A win against the Crusaders would put them into a multi-team tiebreaker that would work itself out after the final regular season games. Tie-breakers in the form of head-to-head wins would decide each team’s fate.

Ridgefield’s loss postponed a possible FCIAC playoff spot, meaning they will have to wait until a home game versus Greenwich to clinch. They fell to 12-7 overall.